Probably the best example of an amphibian that you remember right from your childhood is the frog. Did you know just like the butterfly, a frog also undergoes complete metamorphosis. From a tadpole that breathes with gills and has a tail to an amphibian with developed organ systems, it is a fascinating journey. Let us learn more about frogs.

Frogs are amphibians, they can live both on land and in water. Their lives begin in water when they are eggs. From the eggs, tadpoles emerge, which also live in water. When these tadpoles fully develop they begin to live on land.

A frog is a poikilotherm, which means that it is a cold-blooded animal. The body temperature is not constant and varies according to their surrounding environment. So, when it is very cold, they lay in the sun to get warmer and when it is very hot, they get into the water bodies to cool themselves.

The habitat of a frog is quite varied and can be found all over the world, except maybe, of course, the Antarctic region. They are not marine animals. They can be found only in freshwater habitat. A frog goes into summer sleep called aestivation and winter sleep called hibernation, to escape the peak summer and winter conditions. The common Indian frog goes by the scientific name, Rana tigrina. 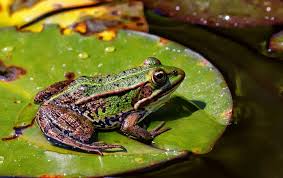 Morphology of a Frog

It is dark green in color with irregular spots on the dorsal side, while in the ventral side; it is pale yellow in color. The head of a frog is triangular in shape with a blunt snout. The eyes of a frog have a nictitating membrane that gives protection when the frog is in water. On the sides of the eyes, a membranous tympanum (ear) is present that receives the sound signals.

A frog has two forelimbs and two hind limbs. They help in walking, swimming, leaping as well as burrowing. Sexual dimorphism is seen in frogs, with the male species having vocal sacs and copulatory pad. These are absent in female frogs.

Body Anatomy of a Frog

This tube-like oesophagus opens into the stomach. It leads to the intestine and the rectum. The rectum opens through an opening called the cloaca. Liver and gallbladder organs are also present along with the pancreas. The liver secretes bile and the pancreas secrete the pancreatic juices.

Food is digested in the stomach by the action of HCL and other gastric juices that are secreted. The food is broken down into simpler substances and in the intestine, it is absorbed and assimilated. Any undigested food waste goes into the rectum and is passed out through the cloaca. In many ways, the functioning of the digestive system of a frog is similar to the human digestive system. 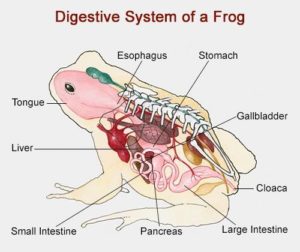 The heart has three chambers and is made up of muscle tissue. It is present in the upper part of the body. The three chambers of the heart consist of two atria and one ventricle. The pericardium covers the heart.

Blood is opaque and sticky and is red in color due to the presence of haemoglobin. It has the blood cells and plasma.  From the heart, the blood goes to all part of the body the arteries, which makes up the arterial system.

The venous system comprising of all the veins carries blood from all organs to the heart. In frogs, there is also a hepatic portal system and renal portal system, where there is a venous connection present in the organs of liver, intestine, and kidneys. 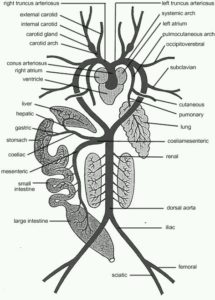 There are present a pair of lungs which are elongated in shape and are sac-like structures. They are present in the trunk region of the body. Through the nostrils, air enters the buccal cavity and then reaches the lungs. When a frog goes into aestivation or hibernation, cutaneous respiration occurs.

The brain is enclosed in a cranium and there are ten pairs of cranial nerves that emerge out of the brain. The brain is divided into three parts – forebrain, midbrain, and hindbrain. The olfactory lobes, cerebral hemispheres, and unpaired diencephalon are included in the forebrain. A pair of optic lobes is present in the midbrain. Cerebellum and medulla oblongata are part of the hindbrain.

The spinal cord is enclosed in the vertebral column. There are different sense organs that present in a frog, which include sensory papillae, taste buds, nasal epithelium, eyes, and internal ears. The eyes and the ears are well developed.

Learn more about the Neural Tissue here in detail.

The male and the female reproductive systems are well developed. The male reproductive system includes the following organs, a pair of testes, Vasa efferentia (10-12 in number) and a urinogenital duct that opens into the cloaca. The cloaca is a chamber which is used to pass the fecal matter, urine as well as sperms to the outside.

The female reproductive system has a pair of ovaries, a pair of oviducts that open into the cloaca separately. A female frog can lay about 2500 to 3000 eggs at a time. External fertilization is seen in frogs and occurs in water. 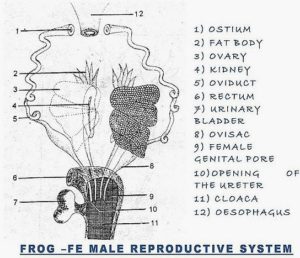 Q: How can you differentiate between a male frog and female frog?