Meaning of Connotation is a secondary word used to express an idea, qualities or feeling in association to its literal meaning. Connotation describes the primary word and it does not need to be a part of the meaning of word or phrase. It generally has an emotional connection which can be positive or negative. For example, I am feeling very blue today. Here blue refers to sad. Let us understand the denotation and connotation meaning in detail with examples.

A rich vocabulary enables you to choose the right words to express yourself. Choosing the right words is important because although two words may have the same meaning, their connotations may differ.

So, what are connotations? Connotations are perceptions or feelings a word conveys, which are distinct from the actual meaning of the words. For instance, there may be words that have the same meaning, but different perceptions. Let us understand this further. 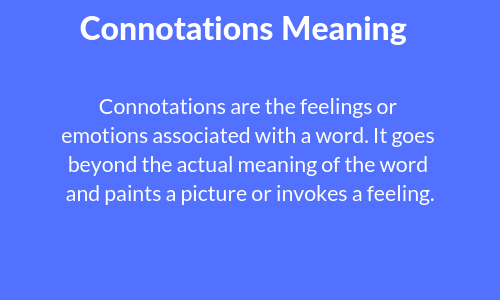 To understand connotations completely, you should first understand the term denotation. Denotation simple refers to the meaning of a word.

That is, denotation is the actual meaning of a word without any reference to any associations or emotions of the word. For example, the denotation of word red is just colour red but its connotation is danger or blood is, Here again you should be careful because, in some instances, the dictionary lists several denotations for a single word. Read more about Denotation here.

This usually happens when people use a word in different contexts. For example, the word “high” has several denotations.

Connotations, on the other hand, are the feelings or emotions associated with a word. It goes beyond the actual meaning of the word and paints a picture or invokes a feeling.

For example, the words “house” and “home” have the same meaning—a place meant for human habitation. However, the feelings or emotions associated with these two words are different.

Connotations are important when you communicate with people. A language, in itself, is subjective in nature and it can evoke different psychological reactions from different people. That is why using the wrong words can totally ruin communication even if your intent and ideas were correct and trustworthy.

The words you choose can significantly change the meaning of a sentence. Hence, you should completely understand both the literal and suggestive meaning of different words before using them.

As connotations express feelings, they may be positive, negative, or neutral depending on the context. A positive connotation makes people feel good.

Connotations can also be formal or informal. With friends or close relatives, you can use informal words or words that do not have a formal connotation. Business communication, on the other hand, should always be formal and neutral.

Consider the words “young”, “youthful”, and “childish”. The word “young” is neutral. It has no associated emotion. It just means a person who is young in age. The word “youthful”, on the other hand, has a positive connotation.

It refers to a person who may not be young but has the exuberance of youth. Finally, the word “childish” has a negative connotation referring to a person who behaves like a child.

Now, look at the words “proud”, “confident”, and “conceited”. The word “proud” has a neutral connotation as it does not have an emotional aspect.

The word “confident” is a connotation with a positive feeling as it projects belief and self-confidence. Lastly, the word “conceited” has a negative connotation as it evokes a feeling of being too self-absorbed.

Q. Give examples of words and their associated connotations.