Ammonium chloride (NH4Cl) that is also known as the ‘sal ammoniac’ is the salt of the ammonia and the hydrogen chloride. Its most common uses are as a nitrogen supply in the fertilizers and as an electrolyte in the dry cells. Moreover, it is also majorly employed as a constituent of galvanizing, tinning, and soldering fluxes to remove the oxide coatings from the metals. Further, to improve the adhesion between the solders. Similarly, many types of cold and cough medicines or remedies also use it because of its efficacy as an expectorant. Ammonium Chloride Formula will help you understand this better.

The chemical formula of the ammonium chloride is NH4Cl and it has a molar mass of 53.490 g mol-1. Moreover, this molecule is formed by two potassium cations K1+ and 1 dichromate anion Cr2O72-. Furthermore, it is present in both the forms that are the anhydrous and the three hydrate. Its chemical structure is shown below in the form of an image, in the common illustrations used for the organic molecules. 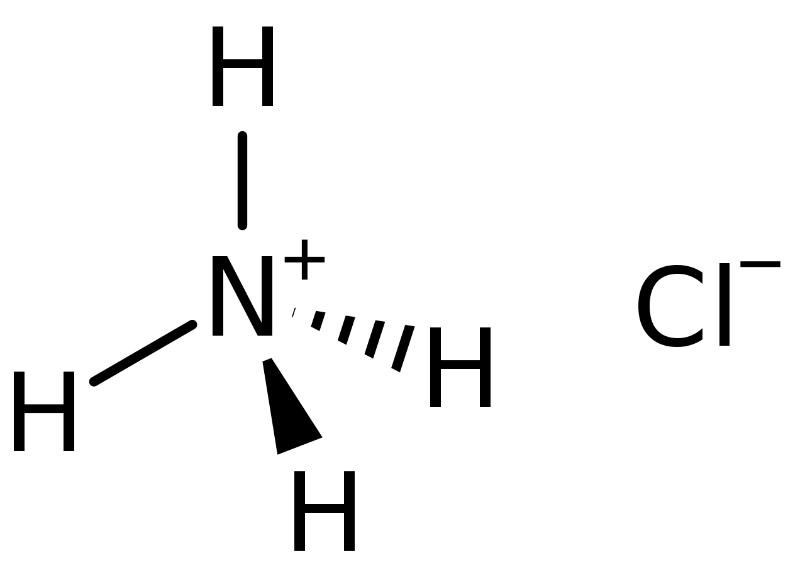 Ammonium chloride is present in mineralogical creations and in this form we refer to it as the ‘salt ammoniac’. In addition to this, it is also present in various volcanic vents and ashes.

One can also prepare Ammonium chloride by multiple methodologies. The first one is through the neutralization with the HCl of the ammoniacal residue made in the distillation of the coal.

The 2nd strategy is by the Solvay process to get the sodium carbonate or bicarbonate and where the ammonium chloride is present as a by-product.

In the Solvay process, the sodium bicarbonate is recovered by the filtration process and then the ammonium chloride that remains in solution crystallizes.

Ammonium chloride is a white solid that has no smell. It has a density of 1.5274 g mL-1 and the melting and boiling points are 338 ºC and 520 ºC respectively. Further, it is soluble in water, ethanol, methanol, and glycerol and it is also slightly soluble in the acetone. Moreover, it is insoluble in organic solvents such as ethyl acetate.

Ammonium chloride may suffer various types of reactions of great value to the chemical and pharmaceutical industries respectively. It can decompose when one heats it into hydrochloric acid and ammonia (a reaction I).

Ammonium chloride has a large source of the nitrogen, so that and similarly to the urea we also use it as fertilizers and add it to the media of bacteria and yeast growth. Moreover, we also use it for the preparation of some metals before galvanization that needs a surface that is free of metal oxides. Further, the pharmaceutical industry also uses ammonium chloride to produce cough syrups and medicines.

Ammonium chloride is very poisonous and toxic and can cause damage to organs by ingestion. It also causes serious eye damages.

Question: Do a solution of NH4Cl and NH4OH acts as a buffer?

Solution: NH4Cl is a strong electrolyte hence, dissociates completely, NH4OH is a weak electrolyte. Its dissociation is further suppressed by common ion NH4+ provided by NH4Cl in the solution.

This solution acts as a basic buffer and maintains its pH around 9.25. It is capable of resisting the change in pH on the addition of a small amount of acid or alkali.