Charles law is an experimental gas law. It explains how gases tend to expand when heated. French physicist Charles studied the effect of temperature on the quantity of a gas at constant pressure. This law describes how a gas expands because of the temperature increases; conversely, a decrease in temperature will cause a decrease in volume. During this article, we’ll discuss Charles law formula, its properties and therefore the experiment performed for verification.

Definition of Charles Law Formula is, “When the pressure on a sample of a dry gas is held constant, the Kelvin temperature and therefore the volume is going to be in direct proportion.”

The equation of the law is PV = k.

Therefore, V=kT. For comparing an equivalent substance under two different sets of conditions, the law is often written as

The equation shows that, as temperature increases, the quantity of the gas also increases in proportion.

Charles’s law appears to imply that the quantity of gas will descend to zero at a particular temperature (−266.66 °C consistent with Gay-Lussac’s figures) or −273.15 °C. At temperature, the gas is having zero energy and hence the molecules restrict motion. Charles from his experiments concluded that at constant pressure, the quantity of a hard and fast amount of a gas increases or decreases by 1⁄273 (now 1⁄273.15) times the quantity at 0 °C for each 1 °C rise or fall in temperature.

We can verify Charles’ law experimentally and determine the value of temperature with regard to the above figure. the first apparatus of the experiment consists of a conical flask and a beaker. The empty flask is submerged into the water-filled beaker as shown within the above diagram. When the warmth is supply to the beaker by a burner, it also heats the air within the flask. 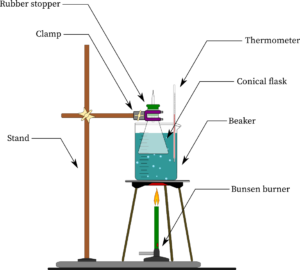 Charles’s law is applicable to only ideal gases. Charles law holds good for real gases only at high temperatures and low pressures. the connection between the quantity and temperature isn’t linear in nature at high pressures.

Here the pressure is constant and only the temperature is modified.