The ethane formula is \(C_{2}H_{6}\). It is an organic chemical compound that was first synthesized in 1834 by Michael Faraday. At normal temperature and pressure, ethane is a colorless, odorless gas. Later Ethane was discovered dissolved in Pennsylvanian light crude oil by Edmund Ronalds in 1864. At room temperature, ethane is an extremely flammable gas. When ethane mixes with air at 3.0%–12.5% by volume, it forms an explosive mixture. We can also store it as a cryogenic liquid. If there is direct contact with liquid ethane, it results in severe frostbite. Below we will discuss and explain more about the Ethane formula and its applications. 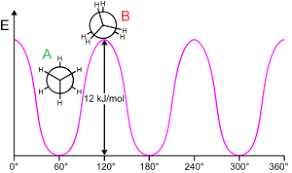 Ethane is a colorless, odorless, and flammable gas having two carbon (C) atoms and six hydrogens (H) atoms. It’s only composed of carbon and hydrogen atoms, so it is classified as a hydrocarbon. Ethane has the second-largest percentage in natural gas. As Ethane structure has single bonds it is classified as an alkane.

It has a boiling point of −88.5 °C (−127.3 °F) and the melting point of −182.8 °C (−297.0 °F). Cooling of Ethane under normal pressure forms into a plastic crystal. Further cooling this ethane below between (−183.2 °C; −297.8 °F) changes it to monoclinic metastable ethane II. Ethane can replace oxygen and become an asphyxiation hazard. Ethane also has no acute or chronic toxicological risk.

The chemical formula for Ethane is:

Hermann Kolbe and Edward Frankland tried to produce ethane by reduction of ethyl cyanide and ethyl iodide with potassium metal. Ethane was finally discovered in 1964. Now the commercially available ethane is derived from the distillation of crude petroleum or other natural gas sources. Ethane can easily ignite forming vapors lighter than air. It is not soluble in water but is soluble in ether, ethanol, ether, and benzene.

Ethane may cause asphyxia by the displacement of air because it is heavier than air. Ethane is a very flammable gas and can easily ignite. It is not compatible with oxidizing agents. In the laboratory, we can conveniently synthesize ethane by Kolbe electrolysis.

Another example of the electrolysis of acetate salts:

It acts as a ripening agent for foods, a refrigerant, a substance in producing welding gas and a primary ingredient in mustard gas.

Q.1.Calculate the Molar mass of Ethane.

Q.2. What is the combustion of ethane?

Ans-  The general reaction of Combustion is

We have to balance the equation. So the actual equation is