Hydrazine refers to an inorganic compound that is a simple pnictogen hydride. Furthermore, it is a flammable liquid that is colorless and has an ammonia-like odor. Hydrazine is highly unstable and toxic. Experts mainly use hydrazine as a foaming agent in the preparation of polymer foams. This article deals with hydrazine formula. 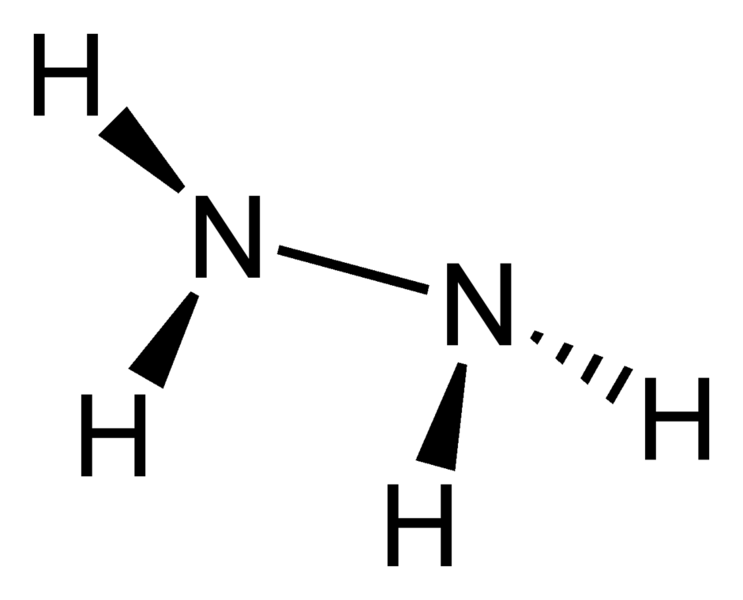 This inorganic compound is a reducing agent and a highly reactive base in many medical and industrial applications. Also, hydrazine happens to be a key building block in the preparation of multiple heterocyclic compounds through condensation with a range of electrophiles that are difunctional.

The chemical structure of hydrazine consists of two \(NH_{2}\) groups that have a covalent attachment. Also, each of the \(N-NH_{2}\) groups adopts a pyramidal shape.

Hydrazine in its colorless form has a colorless appearance. Moreover, it is fuming oily liquid that gives an ammonia-like odor. Hydrazine tends to explode during the distillation process if there is a presence of air traces. Furthermore, this compound can be toxic to the body in case inhalation or skin absorption takes place.

During combustion, hydrazine gives out toxic oxide of nitrogen. Experts use this compound in fuel cells and as a rocket propellant.

This compound is miscible with ethyl, methyl, propyl, and isobutyl alcohol. The compound happens to be slightly miscible with hydrocarbons and halogenated hydrocarbons. When hydrazine comes into contact with chloroform and ether, it is insoluble.

When it comes to stability, this compound is thermally unstable. Moreover, one can store this compound for years if it is sealed in glass and kept in a dark, cool place.

The majority usage of hydrazine takes place as a precursor to blowing agents. Specific compounds include azobisisobutyronitrile and azodicarbonamide, which generate 100–200 mL of gas per gram of precursor. In a related application, the formation of sodium azide is from hydrazine by reaction with sodium nitrite. Sodium azide is a gas-forming agent for the purpose of air-bags.

Experts also use hydrazine as a propellant onboard space vehicles, such as the NASA Dawn probe. Furthermore, experts also make use of hydrazine to reduce the concentration of dissolved oxygen concentration in large industrial boilers. Hydrazine also controls the pH of water used in large industrial boilers. The F-16 fighter jet and U-2 spy plane make use of hydrazine to fuel their emergency power units.

Hydrazine happens to be a precursor to many pesticides and pharmaceuticals. These applications often involve the conversion of hydrazine to heterocyclic rings like pyridazines and pyrazoles.

Question- What is hydrazine and its molecular formula?

Answer- Hydrazine refers to an inorganic compound and pnictogen hydride that is flammable, colorless, and an ammonia-like odor. Furthermore, the molecular formula of hydrazine is \(N_{2}H_{4}\).