Manganese(II) chloride is an inorganic compound. It’s the dichloride salt of manganese. And it is an important nutrient and occurs in many foods of plant and animal origin. It occurs in anhydrous, dihydrate and tetrahydrate forms. The use of it is in the assembly of Leclanche cell batteries. It’s a task as a nutraceutical. It’s a manganese coordination entity and an inorganic chloride. During this chapter, we’ll learn more about Manganese (II) Chloride Formula, it’s preparation, its properties, and uses.

The tetrahydrate is the most typical sort of manganese(II) chloride. The molar mass of it is 125.844 g/mol,161.874 g/mol, and 197.91 g/mol. It appears as a pink solid in its tetrahydrate form. However, it’s soluble in water, ethanol but insoluble in ether. It’s slightly soluble in ethanol.

Aqueous solutions of it are utilized in P-NMR. The use of it is also to determine the dimensions. Mineral systematized it is kempite and it’s a representative of the atacamite group, a gaggle of hydroxide-chlorides. Manganism, or manganese poisoning, is often due to long-term exposure to manganese dust or fumes.

MnCl2 adopts a layered chloride-like structure. The tetrahydrate consists of cis-Mn(H2O)4Cl2 molecules. The trans isomer, which is metastable, is additionally known. The dihydrate MnCl2(H2O)2 may be a coordination polymer. Therefore, each Mn centre is coordinated to four doubly bridging chloride ligands. The octahedron is completed by a pair of mutually trans aqua ligands. 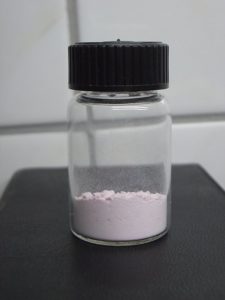 Manganese chloride’s preparation is usually in the laboratory. Treatment of manganese metal with acid is completed to urge it.

As a result, this reaction was once used for the manufacture of chlorine. By carefully neutralizing the resulting solution with MnCO3, as a result, one can selectively precipitate iron salts. And they are common impurities in manganese dioxide.

The hydrates dissolve in water. It gives mildly acidic solutions with a pH of around 4. Acids solutions contain the metal aquo complex [Mn(H2O)6]2+. It’s a weak Lewis acid. Furthermore, it reacts with chloride ions to supply a series of solids containing the subsequent ions [MnCl3]−, [MnCl4]2−, and [MnCl6]4−. Both [MnCl3]− and [MnCl4]2− are polymeric.

However, upon treatment with typical organic ligands, it undergoes oxidation by air to allow Mn(III) complexes. Examples include [Mn(EDTA)]−, [Mn(CN)6]3−, and [Mn(acetylacetonate)3].

Moreover, it is a start line for the synthesis of a spread of manganese compounds. As a result, manganocene is ready by a reaction of MnCl2. And also with a solution of sodium cyclopentadienide in THF.

Solution: It is an inorganic chloride during which manganese(II) is coordinated to 2 chloride ions. In its state manganese(II) chloride may be a polymeric solid. And it adopts a layered cadmium chloride-like structure.