This article will explain Nitrogen Dioxide and its formula. This gas is an extremely poisonous chemical. It can be useful as an inhibitor. It is a pollutant that absorbs UV light and hence does not allow it to come to the surface of the earth. This chemical compound is paramagnetic in nature and it contains two oxygen atoms connected to one nitrogen atom. Students will learn the Nitrogen Dioxide formula with examples. Let us begin it! 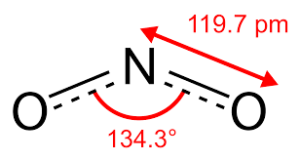 What is Nitrogen Dioxide Gas?

It is also termed as Nitrogen oxide or Deutoxide of nitrogen. It is one of the major atmospheric pollutants which helps to absorb UV lights. This oxide is a yellowish-brown liquid in its compressed form or reddish-brown gas form. Its vapors are much heavier in comparison to air.

This chemical has the bond angle \(134.4 ^{\circ}\) C, whereas the distance between nitrogen and oxygen atoms is 119.7 Pico meter. It has a pungent and acrid smell. It is a toxic chemical when inhaled and absorbed through the skin. Nitrogen dioxide gas is Non-combustible, but it enhances the burning of combustible materials.

The formula for Nitrogen Dioxide

Its chemical molecular formula is :

Some Chemical Properties of Nitrogen dioxide

Q.1: Why Nitrogen Dioxide is useful. Find out its molar mass.

Solution: Nitrogen dioxide is the chemical compound and it is is one of several oxides of nitrogen. It is an intermediate in the industrial synthesis of nitric acid, millions of tons of which are produced each year. It is primarily useful in the production of fertilizers.

Its Chemical formula is:

Q.2: What are the health hazards issues of Nitrogen Dioxide?

Solution: Severe exposures of Deutoxide of nitrogen is very much fatal. When in contact it may cause a burning sensation to eyes and skin. When it is in liquid form then it causes frostbite. It is reported to react with the blood to form chemical methemoglobin. When it was heated then it decomposes and hence releases toxic fumes of nitrogen oxides.