Acidity started being treated with the help of antacids from the year 1970. Antacids are substances that neutralize the acids secreted by the stomach. The acidity in the stomach is the root of sensations like irritation and heartburn. This sensation relieves by the action of antacids. The effects of acidity can majorly suppress by taking antacids orally. The acid reflux which causes a burning sensation in the chest can be neutralized with antacids. The antacids are basically alkaline ions. Thus, they have the chemical ability to neutralize an acid. Antacids do not have any side effects for most of the recipients.

Table of content
1 Suggested Videos
2 Conditions which require Antacids
2.1 Working of an Antacid
2.2 Formulation of Antacids
3 FAQs about Antacids 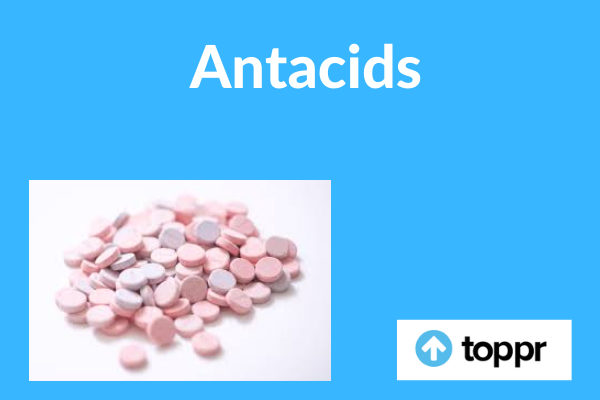 The acid is generally produced by our stomach for carrying out the digestion of food and to eliminate germs (bacteria). This secretion which is acid is corrosive in nature. This acid is also in a concentrated form. Our body produces a natural mucus barrier that aims to protect the lining of the stomach. This prevents the stomach from being worn away or eroded.

In some cases, this barrier is broken down permitting the acid to cause damage. Once, the barrier is broken, the acids start to have adverse effects causing an ulcer. In other people, this could also be a problem of the top sphincter. This is the muscular band at the top of the stomach that functions to keep the stomach tightly closed. When this doesn’t work properly, it allows the acid to escape. This causes irritation in the oesophagus (gullet). This phenomenon is acid reflux. Acid reflux is the cause of problems like heartburn and the inflammation of the oesophagus.

Conditions which specifically require antacids are –

The antacids were used for all these conditions until the arrival of new medications in the market. The modern medicines have taken up a few of the applications. Antacids were primitively used for healing ulcers in the stomach and duodenum.

Working of an Antacid

Antacids function by counteracting the acid produced by our stomach. They neutralize the acidic enzymes in the stomach. They are capable of doing this as they compose of alkalis. The chemicals in these antacids are water-soluble bases or alkalis, which are the opposite of acids. A reaction takes place when an acid and a base are brought in contact. This reaction is called the neutralization reaction. This helps to make the contents of the stomach less corrosive in nature. This greatly helps in bringing relief in the pain related to ulcers. It also reduces the burning sensation and heartburn in acid reflux.

On the reaction of antacids with the stomach’s acids, they produce gas. This can sometimes cause flatulence (wind). This foaming effect created by the antacids can be stopped with the help of Simethicone (INN). This is an anti-foaming agent which is sometimes included in the antacid medications. A number of common antacids have also included alginates in their medication. The alginates function by forming a gel. This gel floats on top of the contents of the stomach including the acid produced. This gel functions as a protective barrier. Alginates prevent stomach acid from causing irritation in the oesophagus (gullet).

Modern times have introduced modern medications. These are more effective than antacids. They do not just neutralize the acid for some time. But also work towards reducing the amount of acid being produced by the stomach in the first place. Some examples are Proton pump inhibitors and H2-receptor antagonists.

The formulation of antacids may be done with other active ingredients. These ingredients include simethicone and alginic acid. Simethicone is useful in controlling gas. Alginic acid acts as a physical barrier to the acid.

This is because of the inhibition of the contraction of smooth muscle cells in the gastrointestinal tract due to the aluminium ions. This results in slowing down the peristalsis and thus the time needed for the stool to pass through the colon is highly lengthened. These products are then formulated in a way to minimize this type of effects. This is done by the inclusion of similar concentrations of salts like magnesium hydroxide and magnesium carbonate. These compounds help to reduce these effects due to their counterbalancing laxative effects.

Q.1. What are some of the side effects of antacids?

Answer. Although antacids are very useful medications, they do have some side effects. The formulations of antacids that contain magnesium as an ingredient may lead to diarrhoea. The versions of the drugs that contain calcium or aluminium are the root of constipation. These are the short terms side effects of the antacids. In the long run, intake of antacids may even lead to cases of kidney stones. Aluminium containing antacids over a long period of consumption increase the risk of osteoporosis.

Q.2. What is the role of histamine in the treatment of acidity?

Answer. Histamine is a major breakthrough in the field of treating hyperacidity. Histamine functions as the stimulator for the secretion of pepsin and hydrochloric acid in the stomach. Cimetidine was a drug specifically designed to restrict the action of histamine. It prevented the interaction between histamine and the receptors to reduce the amounts of acid secretion.

Q.3. What are some of the compounds used in antacid formulations?