Ascorbic acid is a specific vitamin found in various foods and sold as a dietary supplement. It mostly prevents and treats scurvy. Ascorbic Acid is an important nutrient involved within the repair of tissue and therefore the enzymatic production of certain neurotransmitters.

Ascorbic acid helps in the functioning of several enzymes and is vital for a system function. It also functions as an antioxidant. Its formula is \(C_{6}H_{8}O_{6}\) and Molar mass of \(176.124 g.mol^{-1}\). Ascorbic acid is usually well tolerated. Large doses sometimes cause gastrointestinal discomfort, headache, trouble sleeping, and flushing of the skin. Normal doses are safe during pregnancy. 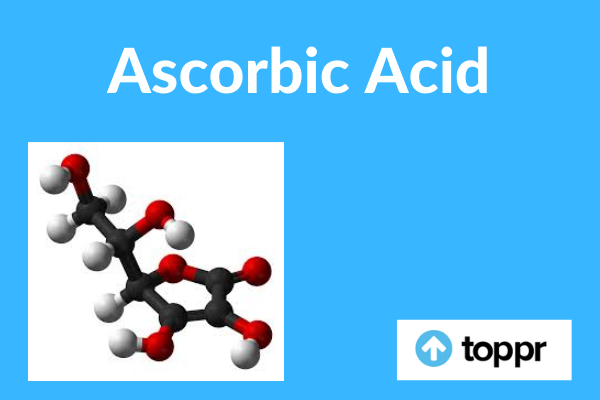 What is Ascorbic acid or Vitamin C?

Ascorbic acid or Vitamin C is an important nutrient in animals and humans. Ascorbate salts like sodium ascorbate and calcium ascorbate is in use as dietary supplements. Ascorbate and vitamin C are both naturally present within the body, since the forms interconvert consistent with pH. Oxidized states of the molecules like dehydroascorbic acid are converted back to vitamin C by reducing agents.

Vitamin C functions as a cofactor in many enzymatic reactions in animals (including humans) that mediate a spread of essential biological functions, including wound healing and collagen synthesis.

Scurvy is a condition or disease resulting from a deficiency of ascorbic acid or vitamin C. Without this vitamin, the collagen which the body forms is just too unstable to perform its function and a number of other other enzymes within the body even don’t operate correctly. In scurvy we get to see many spots and bleeding under the skin, spongy gums, ‘corkscrew’ hair growth, and poor wound healing. The skin lesions are most abundant on the thighs and legs, and an individual with the ailment looks pale, feels depressed, and is partially immobilized.

In untreated advanced cases of scurvy there are open, suppurating wounds, loss of teeth, bone abnormalities and, eventually, death. Vitamin C serum levels are considered saturated at levels > 65 μmol/L while adequate levels are defined as ≥ 50 μmol/L. Hypovitaminosis occurs when vitamin C is ≤ 23 μmol/L and deficiency occurs at ≤ 11.4 μmol/L.

John Woodall, the primary surgeon to British Malay Archipelago Company, recommended the preventive and curative use of juice in his book in 1617 naming “The Surgeon’s Mate”. In old times scurvy used to kill sailors during the long sea voyages. Since 1796 British navy adopted juice as standard issue stumped.

In 1845, ships within the West Indies were given juice instead, and in 1860 juice was in use throughout the Royal Navy. The name antiscorbutic was dedicated in the eighteenth and nineteenth centuries for foods known to stop scurvy. Some of these fruits are lemons, limes, oranges, sauerkraut, cabbage, malt, and portable soup.

The discovery of Vitamin C took place in 1912, isolated in 1928 and synthesized in 1933, making it the primary vitamin to be synthesized. Shortly thereafter Reichstein got success in synthesizing the vitamin in bulk the process came to known as the Reichstein process. This made possible, the cheap mass-production of vitamin C.

In 1934 Hoffmann–La Roche did trademark of synthetic vitamin C under the name Redoxon and commenced to plug it as a dietary supplement. In 1912, the Polish biochemist Funk came with the concept of vitamins. American biochemist Irwin Stone is the first person to take advantage of vitamin C for its food preservative properties. He later bought the idea that humans possess a mutated sort of the l-gulonolactone oxidase coding gene.

According to the study done in 2008, researchers at the University of Montpellier discovered that in humans and other primates the red blood cells have evolved a mechanism to more efficiently utilize the vitamin C present within the body. It is done by recycling oxidized l-dehydroascorbic acid (DHA) back to vitamin C for reuse by the body.

Vitamin C , specifically, within the sort of ascorbate – performs numerous physiological functions within the physical body by serving as an enzyme substrate or cofactor and an electron donor. These functions include the synthesis of collagen, carnitine, and neurotransmitters; the synthesis and catabolism of tyrosine; and therefore the metabolism of microsome. During biosynthesis, ascorbate acts as a reducer, donating electrons and preventing oxidation to stay iron and copper atoms in their reduced states.

Absorption – Approximately 70%–90% of vitamin C is absorbed at moderate intakes of 30–180 mg/day. However, at doses above 1,000 mg/day, absorption falls to half. Vitamin C is absorbs within the body by both transport and straightforward diffusion.

Excretion – Excretion are often as vitamin C, via urine. In humans, during times of low dietary intake, vitamin C is reabsorbed by the kidneys instead of excreted. Only plasma concentrations are 1.4 mg/dL or higher does re-absorption decline and therefore the excess amount pass freely into the urine. This salvage process delays onset of deficiency.

Transport – SVCTs appear to be the predominant system for vitamin C transport within the body, the notable exception being red blood cells, which lose SVCT proteins during maturation.

Vitamin C features a definitive role in treating scurvy, which is a vitamin C deficiency disease. Beyond that, a task for vitamin C as prevention or treatment for various diseases is disputed, with reviews reporting conflicting results.

In industry glucose is in use to produce ascorbic acid or vitamin C by two main process. The Reichstein process, developed within the 1930s, uses one pre-fermentation followed by a purely chemical route. The fashionable two-step fermentation process, originally began in China within the 1960s era. In this era they used additional fermentation to exchange a part of the later chemical stages. The Reichstein process and therefore the modern two-step fermentation processes use sorbitol because the starting material and convert it to sorbose using fermentation. In 2017, China produces about 95% of the planet supply of vitamin C, which is China’s most exported vitamin.

Q.1. Is it okay to take ascorbic acid everyday?

Answer – For adults, the recommended daily amount for vitamin C is 65 to 90 milligrams (mg) a day. Megadoses of vitamin C supplements might causes diarrhea, nausea.

Answer – Consuming too much ascorbic acid or vitamin C has the potential to increase the amount of oxalate in your urine. Thus, it increases the risk of developing kidney stones.

Q.3. Can I take ascorbic acid on an empty stomach?

Answer – While Vitamin C is a largely helpful nutrient, it is a water-soluble nutrient. It is best absorbed when you take them empty stomach.