Hydrolysis is any chemical reaction in which a molecule of water breaks one or more chemical bonds that exists between a particular substance. The term is widely in use for substitution, elimination, and solvation reactions in which water is the nucleophile. Biological hydrolysis is the breaking of biomolecules, where a water molecule is consumed to affect the separation of a larger molecule into components. Carbohydrate is broken into a component of sugar molecules by hydrolysis. For example, sucrose is broken down into glucose and fructose and is recognized as saccharification. It also helps in breaking down proteins, fats, and complex carbohydrates in food. 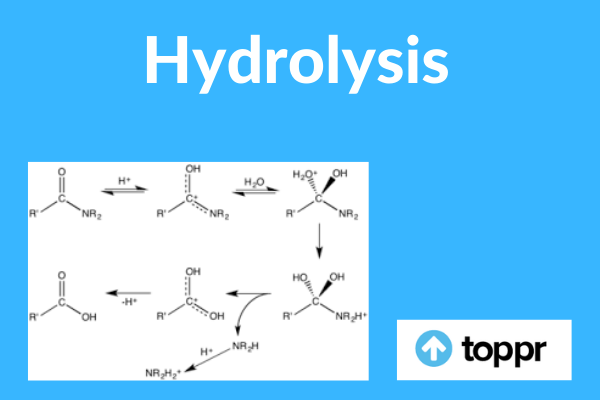 Hydrolysis reactions are the reverse of a condensation reaction. Two molecules come together and become a larger unit and give a water molecule. Thus, hydrolysis is done to break down and condensation builds up by removing water.

Hydrolysis is derived from the Greek word hydro that means water and lysis which translates to the word break or to unbind. In hydrolysis, the water molecules get attached to two parts of a molecule. One molecule of a substance will get an \(H^+\) ion while another molecule receives the \(OH^-\) group. The hydrolysis reaction is mainly in use to break down polymers into monomers.

So, hydrolysis means the act of setting apart chemicals by the use of water. The reaction of water, i.e., \(H_2O\) with another chemical compound results in the production of two or more products. Some examples of hydrolysis are dissolving a salt of a weak acid or base in water or dissolving sulphuric acid in water where hydronium and bisulfate compounds are produced.

The general formula of a hydrolysis reaction is:

Hydrolysis is a process in which water is added to a substance. Sometimes this addition of water causes both substance and water molecule to split into two parts. In such reactions, one fragment of the target molecule gains a hydrogen ion and it breaks a chemical bond in the compound.

It is a common type of hydrolysis that occurs when a salt of a weak acid or weak base or both is dissolved in water. Water frequently ionizes into hydroxide anions and hydronium cations. The salt also dissociates into its constituent anions and cations. For instance, sodium acetate dissociates in water into sodium and acetate ions. Sodium ions react less with the hydroxide ions while the acetate ions combine with hydronium ions to form acetic acid. In this case, the result is an excess of hydroxide ions, yielding a basic solution.

Strong acids also undergo hydrolysis. For example, dissolving sulfuric acid in water. It is followed by hydrolysis to give hydronium and bisulfate, the sulfuric acid’s conjugate base.

It is related to energy metabolism and storage. All living cells require a supply of energy for two main purposes: the biosynthesis of micro and macromolecules and the transport of ions and molecules across cell membranes. The energy derived from the oxidation of nutrients is not used directly but, is done using a complex and long sequence of reactions. It is channelled into a special energy-storage molecule i.e., adenosine triphosphate (ATP). The ATP molecule has pyrophosphate linkages. These are the bonds formed when two phosphate units are combined that release energy when needed.

Second, the removal of a terminal diphosphate to get adenosine monophosphate i.e., AMP and pyrophosphate. The latter undergoes cleavage into its two constituent phosphates. This results in biosynthesis reactions that occur in chains. It can be driven in the direction of synthesis when the phosphate bonds have undergone hydrolysis.

Question 1: What happens during acid hydrolysis?

Answer: Acid hydrolysis is hydrolysis in organic chemistry. In this, a protic acid is in use to catalyse the cleavage of a chemical bond using a nucleophilic replacement reaction and with the addition of water elements \(H_2O\). For instance, in the conversion of cellulose or starch to glucose.

Question 2: What is the purpose of a hydrolysis reaction?

Answer: Hydrolysis reactions use water \(H_2O\) to break down polymers into monomers and when synthesizing a polymer from monomers, is the opposite of dehydration synthesis that shapes water. Hydrolysis break bonds between substances and release steam.

DNA consists of thymine or thiamine??

DNA has thymine, whereas in RNA it is replaced by uracil. Thank you.