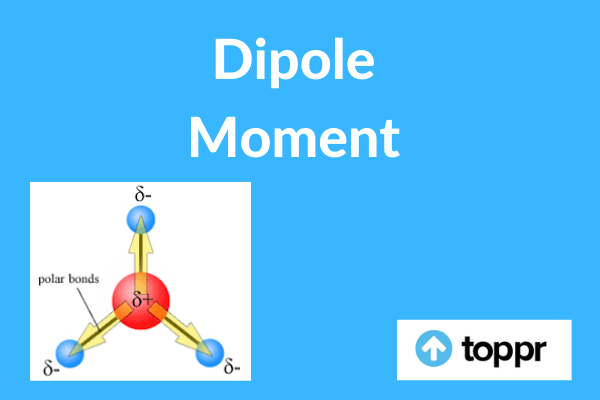 The formula of Dipole Moment

A dipole moment is the product of the magnitude of the charge and the distance between the centres of the positive and negative charges in a system. It is denoted by the Greek letter ‘\mu’.

The bond dipole moment arises between two atoms of different electronegativities. It can be expressed as

The bond dipole moment \(\mu\) is also a vector quantity. The direction is parallel to the bond axis. In chemistry, the arrows that are drawn in order to symbolize dipole moments begin at the positive charge and end at the negative charge. When two atoms with varying electronegativities interact, the electrons tend to move from their initial positions to come closer to the more electronegative atom. This movement of electrons can be shown via the bond dipole moment.

The bond angle between the two beryllium-fluorine bonds in the beryllium fluoride molecule is \(180^o\). Fluorine is a more electronegative atom than Beryllium so it shifts the electron density towards itself. The two individual bond dipole moments cancel each other in a \(BeF_2\) molecule. As they are equal in magnitude but are opposite in direction the net dipole moment of a \(BeF_2\) molecule is zero.

The dipole movement is in use for calculating the percentage ionic character in a molecule.

Question 1: How do you find the largest dipole moment?

Answer: Carbon dioxide \(CO_2\) has a linear geometry at the core with carbon and oxygen on both sides. Thou, oxygen is more electronegative than carbon, the carbon electron cloud is pushed to oxygen and both oxygens pull the electron cloud from both sides with the same tendency. So, the net effect is zero.

Answer: The dipole moment \(\mu\) is the calculation of the net molecular polarity at either end of the molecular dipole. It is the magnitude of the charge Q times the distance d between the charges. Dipolar moments show the division of charges in a molecule. The dipole moment is measured in Debye.