Table of content
1 Suggested Videos
2 What is An Atom?
2.1 Browse more Topics under Atoms And Molecules
2.2 Symbols for Atoms of Various Elements
2.3 What is An Atomic Mass?
2.4 Chemical Formula
3 Solved Example For You

What is An Atom?

Have you noticed how a house is made, brick by brick? It all starts with laying the first brick which gradually graduates into a full-fledged wall. If this wall is a chemical compound, then the brick is the atom. An atom is the smallest indivisible particle in any chemical equation.

While they may be the smallest unit of a chemical compound, their importance is pretty much like that of the brick used to build the house. Without it, there will be no house. Similarly, our entire universe is made up of atoms.

Symbols for Atoms of Various Elements

Every element in nature is signified with a chemical name, a chemical valency and a symbol which is used to refer to this element while creating chemical equations. This symbol denotes a singular atom. That is to say, when we refer to Aluminium as Al, it refers to a single atom of Aluminium.

The first scientist to use symbols for chemical elements was Dalton. He was the one who used the symbols of the elements in a specified quantity, i.e one atom of the element. Later on, Berzilius suggested that we could use one or two letters of the element to form its symbol.

Initially, symbols for the name of elements were derived from the place they originated from. So copper was taken from Cyprus, while gold was meant yellow and so it was denoted accordingly. However, today the International Union of Pure and Applied Chemistry approves the element names.

For example, the chemical symbol for Potassium is K. This ‘K’ is derived from Kalium. Iron is denoted by ‘Fe’ which comes from the Latin word “Ferrum”. H for Hydrogen, Co for Cobalt. This ensures that each element has a unique symbol.

What is An Atomic Mass?

Dalton in his Atomic theory further theorized that each element consisted of an atomic mass. This theory was widely accepted as it explained the law of constant proportions and the scientists were encouraged to weigh the atomic mass of the elements. However, it was soon realized that determining the mass of an atom was not an easy exercise.

Therefore, scientists developed a way of determining atomic weight by forming compounds using the law of chemical combinations. In 1961 a standard unit of Carbon atom was determined to be 12 isotopes (Learn more about Isotopes and Isobars here).  It was proposed that one atomic mass unit was 1/12th of the mass of the mass of a single carbon atom. Based on this relative masses of other elements were also determined.

As already stated, a chemical formula is a symbolic expression signifying the number of atoms present in a molecular substance. We determine the type of atom by referring to its symbol, so for Hydrogen, we will use H. The number of atoms is determined by the subscript attached to the symbol.  So a chemical formula of water, i.e H2O has two atoms of hydrogen and a single atom of oxygen.

Steps for writing a chemical formula

Step 1: First, you have to decide the type of the bond.

If the prefixes are used, then it is a covalent bond. In case there are no prefixes, it is an ionic bond. After that is decided move to Step number 2.

Step 2: Now, write down the symbol of the polyatomic ion or the element. 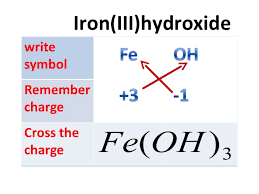 Q. Write the chemical formulae for

Ans. C6H14 – this has 6 atoms of carbon and 14 atoms of Hydrogen and is collectively called Hexane. NaCl- also known as Sodium Chloride or common salt, this formula has a single atom of Sodium and a single atom of Chloride. Always remember that in places where there is no subscript, like in the example above, the value of atom is presumed to be 1.