Do you have a nickname? Most people have nicknames that make them recognizable and offer a sense of uniqueness. Similarly, in chemistry various elements have a special symbol that acts as an indicator to figure out their presence, these are element symbols. This method to symbolize elements was initiated by John Dalton in 1803. Let us know more element symbols.

Dalton used symbols to characterize the atoms of various elements. You can call it as the first use of symbols for representing the elements associated with modern chemistry. Later on, he managed to prepare a table comprising of 21 elements which were arranged by atomic mass. This idea was sooner published in a scientific paper. Dalton managed to prepare 36 different element symbols.

Table of content
1 Suggested Videos
2 Introduction to Element Symbols in Chemistry
3 What is IUPAC?
4 Question For You

Introduction to Element Symbols in Chemistry

Considering the early days, the element names were derived using popular places from where they were first time found. Just like copper which was taken from Cyprus. Moreover, some names were picked up from specific colors. For example, gold was referred from the English word that means yellow. 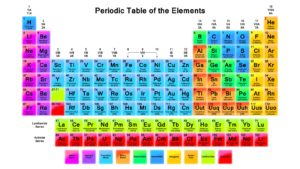 In the present time, element symbols and names are sanctioned by IUPAC; that is, International Union of Pure and Applied Chemistry. It should be noted that many symbols are usually the first one or two letters of their actual name in English. In addition, the first letter of a symbol would always be written in capital or uppercase.

Also, the second letter comes in small letter or lowercase. For example, Hydrogen H, Aluminium Al, and Cobalt Co. Furthermore, symbols for some elements are created from the first letter of their name together with a letter falling later in their name. For example, Chlorine, Cl and Zinc Zn.

There are symbols that have been picked from the names of elements mentioned in Latin, Greek or German. Just like the symbol for iron which is Fe and has a relation to its Latin name ferrum. So is the case for sodium (Na) natrium, as well as potassium (K) from kalium. Hence, each element possesses a name and an exclusive chemical symbol.

Focusing on the history of chemistry, the period between the 1960s and 1990s was termed as Transfermium Wars. Here the word trans means “after” element fermium, which was marked 100 in the Periodic Table. Almost for three decades, a number of scientists have fought several wars of words over the naming of elements ranging from 104 to 109.

The discovery of some rare elements almost at the same time led to the clash among Russian, German and US scientists. Everyone had their own preferences in context to name the elements. This is where IUPAC came into the picture to resolve the issue in 1997. As a solution, elements 104 and 106 were handed over to Americans; 105 and 107 to Russians and 108 and 109 were handled by the Germans.

Since then the IUPAC has been regarded as the supreme body which decides who deserves the actual credit for the discovery of elements. This includes the authority to transfer the right to recommend a name. It has been noticed that matching up with the traditional elements are usually named after a mythological character or concept; a mineral, a geographical region; a scientist or a property of that particular element. Furthermore, the names of a new element would end in “-ium.”

Post the discovery of the element and its confirmation, the element would be referred using its number, or a provisional name can be used until a proper symbol is fixed. Also, the final name is dependent on the approval by the IUPAC. It also holds the power to disregard the explorer.

Q1. What is the element symbol for Gold?

Q2. What element has a symbol Si?