Table of content
1 Suggested Videos:
2 Biomacromolecules
2.1 Browse more Topics under Biomolecules
2.2 Let’s look at each of these biomacromolecules in detail:
2.3 1. Proteins:
2.4 2. Nucleic Acids:
2.5 3. Carbohydrates:
2.6 4. Lipids:
3 Solved Examples for You

Biomolecules or biological molecules are substances which are produced by the cells of the body and are found in living organisms. Biomolecules are broadly classified into two categories based on their size:

Biomacromolecules are biomolecules which have a large size of 800 to 1000 daltons, high molecular weights and complex structures. They are biological polymers of different simple or monomeric units.

Examples of Biomacromolecules are Proteins, Nucleic Acids(DNA and RNA), Carbohydrates and lipids.

Let’s look at each of these biomacromolecules in detail:

They are said to constitute the majority of biomolecules in a cell. Simpler units known as amino acids make up these biological polymers. They are linked together by covalent bonds known as peptide bonds. There are 21 different types of amino acids. Proteins are responsible for many functions in the body. Hence they are classified into different types based on their function e.g.  structural proteins, enzyme proteins, transport proteins etc. Proteins have a complex structure which divides into the Primary structure, Secondary structure and tertiary structure.

Smaller monomeric units that are known as nucleotides form nucleic acids. Nucleic acids regulate various functions in the body such as growth, reproduction and metabolism. These are parts which form the genes of an individual that is responsible for heredity. There are primarily two types of nucleic acids: DNA and RNA. DNA or deoxyribonucleic acid consists of nucleotides made up of four nitrogen bases namely adenine, guanine, thiamine and cytosine. Whereas adenine, guanine, cytosine and uracil( in place of thiamine) make up RNA or ribonucleic acid.

These are biomolecules which primarily contain carbon, hydrogen and oxygen. Another name for them is sugars. Carbohydrates are classified into different classes depending on the number of monomer units present in them such as monosaccharides(single monomer unit), disaccharides( two monomer units), polysaccharides(multiple monomer units). Monosaccharides have other names e.g glucose, fructose. Glucose is the energy currency of the cells in animals and fructose is in plants. These sugars contain an aldehyde group or a keto group and the bond between these groups and an alcoholic group of another monomer unit is known as a glycoside bond or linkage.  Polysaccharides are primarily of two types: structural and food storage.

Lipids are similar to carbohydrates in that they are made up of carbon, hydrogen and oxygen. But, they constitute a very heterogeneous group of substances. Unlike carbohydrates, on hydrolysis, lipids yield glycerol and fatty acids. The fatty acids are of two types: unsaturated and saturated fatty acids and all of them end with a carboxylic acid group. Lipids are also found in fats, oils, hormones and other structures such as the cell membrane. A complex form of lipids which is stored in the body as adipose tissue is known as triglycerides  Lipids are said to be ‘hydrophobic’ and are not miscible in water in contrast to the other biomacromolecules which are ‘hydrophilic’. Therefore, we can summarise to say that lipids function as energy-storage molecules, chemical messengers, and structural components of cells.

You can download Biomacromolecules, Metabolic Basis for Living. Bond-linking Monomers Cheat Sheet by clicking on the download button below 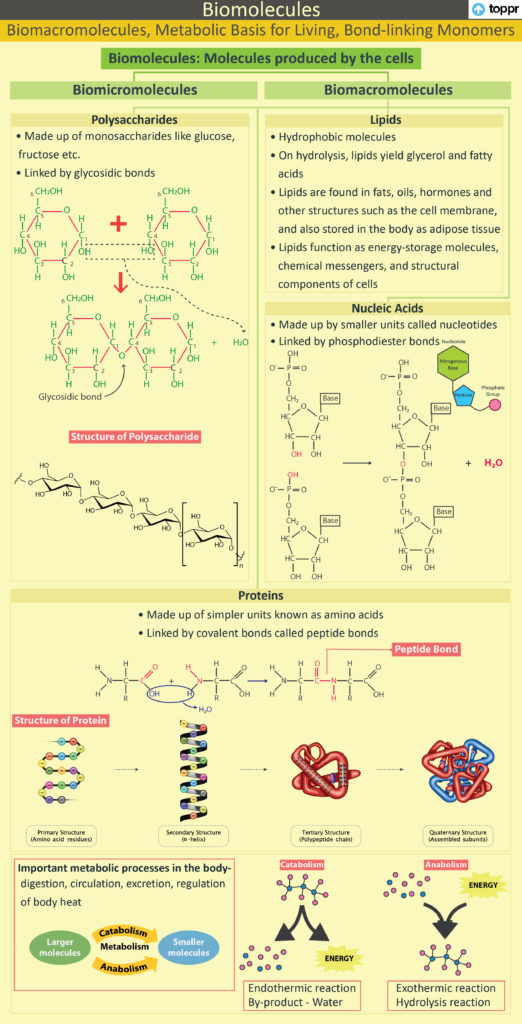 Q: Which is the organic compound found in most cells?

Solution: The correct answer is option “b”. Glucose is a monomer which is formed of six carbon atoms.