Have you ever come across ‘DNA match’ while watching a Crime Series? Well, DNA is a type of Nucleic acid. Nucleic acids are biomolecules that are the building blocks of an organism. They are the information carriers within each cell, which basically transfer genetic material from one generation to the next. Interesting? Let’s find out more.

Table of content
1 Suggested Videos:
2 What are the types of nucleic acids?
3 What is the structure of these Nucleic Acids?
4 Structure of DNA
5 Structure of RNA
6 Solved Example for You

What are the types of nucleic acids?

What is the structure of these Nucleic Acids?

Nucleic acids are polymers which are made up monomer units called as nucleotides. Each nucleotide consists of three parts:

DNA has a double-stranded structure helical structure formed from two polynucleotide chains. Each of these chains is also helical in nature.  The two helical chains which intertwine with each other are held together by the hydrogen bonds between the paired nitrogen bases. When the two helical chains intertwine, the hydrophobic nitrogen bases are on the inside while the phosphate groups on the outside.This hydrogen bonding between complementary bases on each strand provides a mechanism for the DNA replication and transmission of genetic information. DNA is present only in eukaryotic animals. 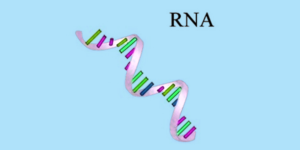 Unlike DNA, RNA is a single-stranded nucleic acid polymer. It has four nucleotides namely adenine, guanine, cytosine and uracil. During the process of DNA replication, RNA is the first intermediary that is formed. Where DNA is quite stable and the ideal genetic material, RNA is reactive in nature and is sensitive to oxidising agents. In DNA, the complementary base pairing occurs between both the strands but in RNA, the base pairing occurs with bases within the same strand. RNA is found as the genetic material in prokaryotes.

RNA are of different types depending upon their function:

Q:  Which nitrogen base pairs up with Adenine?

Adenine pairs with both thiamin and uracil. Adenine forms two hydrogen bonds with thiamin in DNA and with uracil in RNA. So, the correct answer is option d.