Since each element has a unique atomic number, therefore, each element has a different number of protons in its atom’s nuclei. A proton carries a positive electric charge which is equivalent to an electron’s negative charge. The word “Proton” is a Greek word and its meaning is “first” and this name was given by New Zealand physicist Ernest Rutherford in 1920. 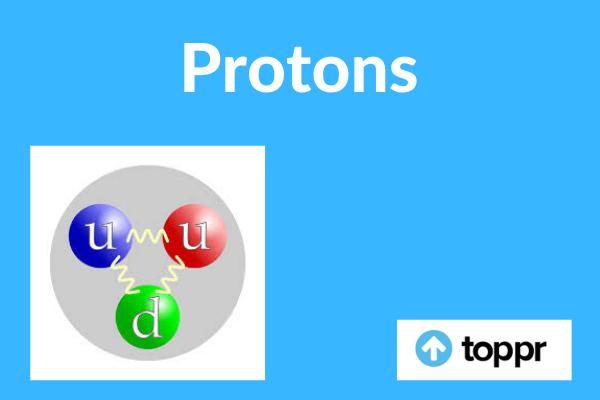 The discovery of proton was initiated when Ernest Rutherford started the experiments to discover hydrogen-like atoms in other atoms. He noticed that when alpha particles are shot in the air the scintillation detectors showed the typical hydrogen nuclei as a product. He found that when alpha particles bombed on nitrogen gas the alpha particles were captured and absorbed by nitrogen gas and the nitrogen nucleus converted to a heavy oxygen atom by releasing hydrogen nucleus as a result. In this way, a hydrogen-like nucleus with a positive charge was produced and he termed this particle as “Proton” first time in 1920.

This experiment supported Prout’s hypothesis that hydrogen is the building block of all elements and it is the simplest and lightest element. He named this fundamental building block of the nucleus as “Proton” which is a Greek word and has meaning as “first”.  Each element’s atom has the same number of protons in its nucleus as it has the atomic number. This number defines the element’s position in the periodic table. As the protons are positively charged sub-atomic particles therefore in a neutral atom, the number of protons is equal to the number of electrons which are negatively charged sub-atomic particles.

The ionised hydrogen which is simply proton has high velocity and this property of proton is used to study the nuclear reactions. Protons are the constituent of cosmic rays. These rays are created artificially in the nuclear reactions and therefore protons produced are utilised as projectiles for other reactions or field.

In the late 20th century, the structural understanding of protons and neutrons were refined and discovered that these particles are further made up of small particles termed baryons and these baryons are composed of other smaller particles known as quarks.

A proton has two up quarks and one down quark. The electric charge on up quark is equal to \(\frac{2}{3}e\), which is a positive fractional charge. On the other hand, the electric charge on down quark is equal to \(-\frac{1}{3}e\) which is a negative fractional charge. Where ‘e’ the value of charge on a single electron without the sign. As protons are not fundamental particles they have a measurable size. Its size is \(0.84 \times 10^{-15}\) to \(0.87 \times 10^{-15} m\), which is the root mean square charge radius.

The mass of the proton consists of the mass of quark particles and the gluon fields which bind the quarks together. Though the masses of quarks contribute nearly 1% of the total mass of the proton, the rest mass consists of gluons. The nuclei of an atom consist of protons and neutrons, collectively known as nucleons, bind together with nuclear forces within the nuclei. The total mass of protons and neutrons make the mass of an atom and it is represented as the mass number of atom.

Protons are made from other fundamental and elementary particles referred to as Quarks. The instability of these subatomic particles, quarks, makes them pair with each other and therefore, they are never found in isolation. They combine to form stable hadrons. In the protons and neutrons, elementary particles like baryons and mesons are found within the quark-gluon plasma.

It means up and down quarks are commonest within the universe as they’re stable. Whereas other elementary particles charm, strange, top and bottom quarks can only produce when high energy collisions occur like cosmic rays and particle accelerators like cyclotrons.

The electric charge on up, charm and top quarks are equal to \(\frac{2}{3}e\), which is a positive fractional charge. On the other hand, the electric charge on down, strange and bottom quarks is equal to \(-\frac{1}{3}e\) which is a negative fractional charge. All flavours of quarks have antiparticles (or antiquarks) to each and the electrical charges on these antiparticles are opposite to their corresponding quarks.

Answer: No, protons are not elementary particles as they can be broken down into other small particles. Protons further consist of small particles, baryons and these baryons consist of other smaller particles, quarks. These quarks occur in pairs and there are three pairs, “flavours”. This way, there are sis flavours, namely, up and down, top and bottom and charm and strange.

Q.2: How do the atomic number and atomic mass correlate with protons?

Q.3: How protons are useful in the medical field?

Answer: Protons are useful in the treatment of diseases and they are part of proton therapy or proton radiotherapy. In this, a beam of protons is used to irradiate the diseased tissue. A disease that is treated with this therapy is cancer. The main advantage of proton therapy is that protons penetrate to smaller depth and do not produce scattered radiation which helps to save nearby healthy tissues.