Waste generation is a natural and unavoidable activity done by humans. Water is in use for different purposes at homes, in industries, factories, railway stations, etc. and make it dirty. This dirty water is sewage. Although water reserves get replenished day by day, though the resource is limited. If exploitation of resources continues at the present pace, situations like drought and scarcity can occur in the near future. 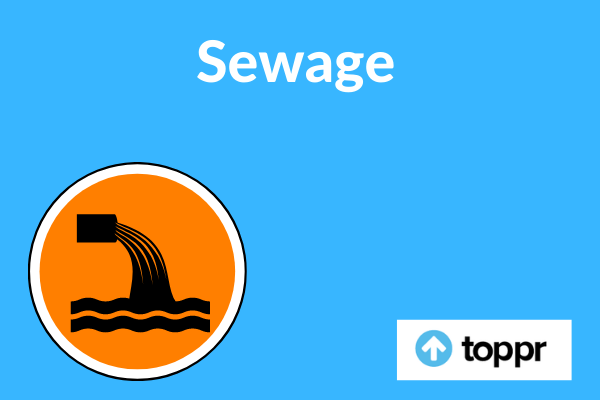 Sewage or domestic/municipal wastewater is a type of wastewater produced by a community of people. The amount of sewage is characterized by volume and rate of flow, physical and chemical condition, toxic constituents, and its bacteriologic status. Bacteriologic statues mean which organisms it contains and in what quantities. Mostly it has greywater that is from sinks, bathtubs, showers, dishwashers, and clothes washers. It also contains blackwater, which is the water in use to flush toilets, soaps and detergents and toilet paper.

Sewage travels from a building’s plumbing either into a sewer that will carry it elsewhere or into an onsite sewage facility. Whether it is combined with surface runoff in the sewer depends on the sewer design like sanitary sewer or combined sewer. Most of the wastewater globally remains without any treatment. It causes widespread water pollution, especially in low-income countries.

Treatment of sewage is based on a method provided by nature, i.e., by using microbial action. When a consistent supply of air is pumped into a tank that has sewage that has been screened to remove all floating debris and non-soluble contents in sewage. Microbes that are present in it gets activated. These microbes are in the sludge that makes up a substantial part of sewage. They also consume the pollutants present in the sewage while the air supply brings them to life and keeps them alive and multiplying.

This is a time-tested system called the ‘Activated Sludge Process (ASP)’. This system is the oldest system known worldwide and is the most used process world over. An STP that is based on this aerobic process consists of major stages of treatment as follows:

Sewage is a complex mixture of chemicals, with different distinctive chemicals. These include high concentrations of ammonium, nitrate, nitrogen, phosphorus, high conductivity, high alkalinity, with pH typically ranging between 7 and 8. The organic matter of sewage is calculated by finding its biological oxygen demand (BOD) or the chemical oxygen demand (COD).

Sewage contains human faeces, and therefore it contains pathogens of one of the four types as given below:

Sewage is monitored for both disease-causing and benign organisms with a variety of techniques. Traditional techniques involve process like filtering, staining, and examining samples under a microscope.

Sewage contains environmental persistent pharmaceutical pollutants. Trihalomethanes are also present as a result of past disinfection. Sewage is analyzed to determine relative rates of use of prescription and illegal drugs among municipal populations.

Question 1: How can sewage be treated/re-used/re-cycled?

Answer: This requires plumbing to be laid to serve two sets of storage tanks on the roofs of any residential/commercial building. One set of storage tanks will receive and store freshwater that will flow through plumbing laid. This laid will take it to bathrooms and kitchens where it can be in use for drinking, cooking, washing and bathing. The second set of tanks will receive treated sewage which will be connected by plumbing to all the flush tanks in toilets and to other points where the is in use for washing yards, floors and also for gardening.

Question 2: What is the need to treat sewage?

Answer: Water in use for domestic purposes does not require potable quality of water. For instance, water used for flushing toilets or washing floors, yards or roads and gardening does not require to be potable. In a scenario, if freshwater gets increasingly scarce and enormous volumes of sewage generated is not being treated but goes unchecked to pollute freshwater from lakes, rivers and the groundwater table, it must be treated.

Discharging untreated sewage into any drains or open land. It is an offence and invites prosecution under the laws of all Pollution Control Boards. Sewage must be treated properly and then re-used or re-cycled for various uses that don’t need potable water quality. Recycling/reusing treated sewage can reduce freshwater requirements vary substantially, by almost 50-60%.

Question 3: What is Waste Water? How is it generated?

Answer: Wastewater is the water that emerges after freshwater is that is in use by human beings for domestic, commercial and industrial use.  By and large, it is fresh water that is in use for a variety of domestic uses like for washing purpose, bathing and flushing toilets. Washing also involves the washing of utensils, washing vegetables and other food items, bathing, washing hands, washing clothes.

The water that emerges after using has vegetable matter, oils that are in use for cooking, oil in the hair, detergents, dirt from floors that have been washed. Also, it contains soap that is in use in bathing along with oils or greases washed from the human body. This water is Grey Water or sullage. Water in use to flush toilets to evacuate human excreta is Black Water or Sewage.

Greywater is easier to purify as compared to black water(sewage). However, the practice predominantly followed in India to combine these two wastes to discharge into a public sewer or sewage treatment plant in a residential community or building that has no access to a public sewer.

Share with friends
Previous
Sucrose
Next
Scarcity of Water