Any form of precipitation like rain that has the unusual presence of acid in it is acid rain. This indicates the high number of hydrogen ions in the rain giving low pH. Acid rain has adverse impacts on aquatic life, plants and infrastructure facilities. The main components of acid rain are formed by the reaction of emitted sulfur dioxide and nitrogen oxide with water vapour molecules in the air. This reaction of water and oxides result in the formation of acids.

There are efforts to reduce these types of emissions to avoid acid rain. However, the natural production of nitrogen oxide occurs at the time of lightning strikes. Sulphur dioxide naturally occurs in volcanic eruptions. Acid rain corrodes heavy steel structures like bridges and weathers the statues, sculptures, and buildings carved out of stone. It not only damages infrastructure but also has grave impacts on human health. 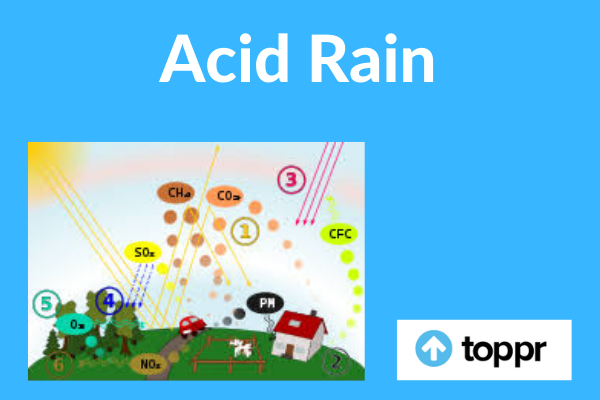 Volcanic eruptions are the major natural phenomena that contribute to the emission of acid-producing gases. Poas volcano is an example of a natural source of acid rain and fog. It causes acidity as high as a pH of 2. This results in the prevention of any vegetation around it and also proves to be hazardous to the people living nearby. The people suffer from irritation in the eyes and problems related to the lungs. Some other underground biological processes may also lead to acid rain. These could also be based on wetlands and oceans.

The compound dimethyl sulfide is the biological parent of sulfur dioxide gas. Nitric acid formed due to nitrogen oxide in the rainwater is a major source of fixed nitrogen for the plants. This is produced by the fixing of nitrogen by lightning strikes. But higher amounts of this acid prove to be harmful. In remote parts of the world, many glaciers have been detected with acidic deposits.

Way before the conversion of these gases into acids, they can travel many kilometres in the atmosphere. After their conversion into acids, these acids form deposits in various forms. Factories nowadays have taller smoke funnels in comparison to the previous shorter funnels to prevent many problems. But the taller funnels result in the further dispersion and transport of these gases causing widespread harm.

Acid rain causes a reduction in pH and an increase in the aluminium concentrations of surface waters. These factors cause damage to the life of aquatic animals. Most fish eggs are unable to hatch under a pH of 5. Lower values of pH can also lead to the death of adult fish. The reduction or deterioration of biodiversity is due to the acidification of lakes and rivers.

Some specific fish species and insect life eliminate from the streams and lakes as a result of acid rain. An example is the Adirondack Mountains in the US which is a geographically sensitive area and has suffered the extinction of brook trout.

The contribution of direct and indirect impacts of acid rain on the lakes and streams are variable and depend on the surrounding water supplies. In the lakes within limestone or other basement rocks having carbonate composition have a less acidic nature. This is due to the buffering effect of carbonate minerals. On the other hand, the lakes within silicate basement rocks are more acidic with the same amount of acid rain.

Acid rain has indirect impacts on vegetation and forest life. It affects the soil in the region and indicates the high concentration of gaseous pollutants. The forests present on high altitudes are surrounded by clouds and fog which turns out to be more acidic than the rain. Thus, these forests are more vulnerable to the hazards of the acidic atmosphere.

Acid rain also damages other kinds of plants in the forests. These are saved from the harmful effects by applying fertilizers and lime. These replace the nutrients that are lost in the process. In the areas of cultivation, limestone is added to the soil. This results in the stabilization of the pH level of the soil. But in the areas of wilderness lands, this method proves to be unusable.

A reaction tower containing a fan that extracts hot stack gases from a power plant toward the tower is a wet scrubber. To combine with the sulfur dioxide present in the stack gases, a slurry of limestone is injected into the reaction tower. Now the reaction takes place between the carbonate of the limestone and the sulfur dioxide. This reaction gives the pH-neutral calcium sulfate. This calcium sulfate can be physically eliminated from the wet scrubber.

Q.1. What are the impacts of acid rain on human health?

Answer. The direct impact of acid rain on human health is less. The acidity in the rainwater is less to cause adverse health hazards directly. But the gases responsible for the production of acid rain have very grave effects on the human body. The atmosphere with low pH level causes irritation in the eyes. When the particulate matter and acidic material increases in the air, it causes heart and lung problems. This results in diseases like asthma and bronchitis.

Q.2. What is emissions trading and how does it help?

Answer. Emissions trading involves the purchase of an emissions allowance for every unit of a designated pollutant emitted by a polluting facility. This helps the operators of these facilities to install pollution control equipment. Then they are capable of selling their portions of emissions allowances which are not now required for the operation of the facility. This helps in recovering a part of the capital cost of their investment in this equipment. This regulatory scheme incentivizes the installation of pollution control devices.

Q.3. What is the difference between dry and wet deposition of acid?