Water, the primary component of the Earth’s hydrosphere and the fluids of all living creatures, is an inorganic, clear, tasteless, odourless, and almost colourless chemical element. Its chemical formula is \(H_ {2}O\), indicating that one oxygen and two hydrogen atoms are present in each of its molecules, connected by covalent bonds. At an angle of 104.45°, two hydrogen atoms are bound to one oxygen atom. Learn conservation of water here.

Water management encompasses both policies, techniques, and initiatives to sustainably maintain, preserve the hydrosphere, and satisfy existing and potential human demand for the renewable resource of fresh water. The aims of the attempts at water management include: 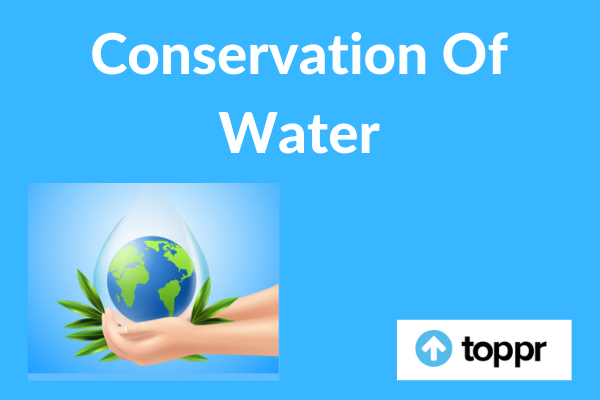 The most valuable natural resource on Earth is water. It occupies almost three-quarters of the atmosphere of our planet. Astronauts claim the Earth, with its blue oceans and white swirls of water droplets (clouds) in the atmosphere, appears like “blue marble” from space (mass of air surrounding Earth). A sustainable resource, too, is water.

Within the hydrologic loop, water flows constantly and is rarely lost in the process. Freshwater replaces it when people drain water from streams, ponds, oceans, or reservoirs of freshwater (aquifers). Water is self-cleansing, too. It leaves contamination and salts behind as it evaporates and forms clouds that create fresh rainwater. Freshwater that passes through contaminated lakes and rivers serves to dilute and distribute (spread out) contaminants.

Just a small percentage of the Earth’s overall water source is fresh, liquid water that is safe for human consumption. The undrinkable saltwater that exists in the oceans is almost all (97 per cent) of the Earth’s water. Seawater corrodes (wears away) metals and gums up equipment, in addition to being too acidic to drink, rendering it unsuitable for any other human uses.

In the glaciers and ice of the North and South Poles, most of the remaining 3% is frozen. Second, in the Earth’s atmosphere, freshwater is spread unevenly. There are plentiful irrigation reservoirs in some areas and others are arid deserts where water is scarce. Thirdly, while, in a general sense, water is a sustainable resource, local and even regional sources of water will run dry from overuse.

Finally, to the effect that water is unhealthy for human consumption and affects the broader environment, human actions that introduce chemical compounds to surface water, groundwater and the oceans will pollute water. Water conservation and management are highly necessary for all these purposes.

Water management projects that are active with social solutions are usually implemented either by public water systems or state councils at the local level. Public awareness programs, tiered water pricing (charging significantly higher costs as water usage increases), or restriction on the use of outside water, such as lawn watering and car washing, are typical techniques.

In California, most urban outdoor water use is industrial, highlighting a cause for outreach to households as well as corporations. Universal metering is one simple conservation aim. Worldwide, the incidence of residential water metering varies considerably. In less than 30 per cent of UK homes, recent surveys have found that water sources are metered. Because crop irrigation accounts for 70 per cent of the world’s fresh water consumption.

According to some reports, there is a worldwide need to figure out conservation efforts for farmers. Both economically and politically, the agricultural sector of most countries is significant, and water subsidies are widespread. For users, modern technology offers a few new choices, features such as full flush and half flush when using a toilet aim to make a difference between the use of water and waste. It is also possible to use “polluted” water in steps (last use in flush toilets), making further use of water within the same time for different activities.

Modern showerheads that help minimize water pollution are now available. Old shower heads are said to use 5-10 gallons per minute. While newly available fixtures use 2.5 gallons per minute to have equivalent water coverage. Another strategy is to directly recover the shower water into a semi-closed system that features a pump and filter. At the VIRTUe LINQ building, such a setup (called a ‘water recycle shower’) is very useful. It even reuses the heat of the water, in addition to water which is recycled.

The accumulation and preservation of rain, rather than allowing it to wash down, is rainwater harvesting (RWH). Rainwater which gets accumulate from a surface close to the roof which is transfer to a percolated tank, cistern, deep pit (well, pipe, or borehole), aquifer, or reservoir. Its applications include gardens for watering, poultry, drainage, properly handled household use, and domestic heating.

Rainwater harvesting is one of the easiest and oldest techniques, typically borne by the individual, for the self-supply of water for households. Nevertheless, larger structures will only rack up bills for colleges, hospitals, and other services that can be paid by owners, associations, and government units.

Rainwater irrigation is a vital source of clean water in places where clean water is expensive, or hard to come by. If users undergo extra treatment before drinking, rainwater is safe to drink. To remove germs, boiling waterworks. A typical procedure to eliminate water pollutants is often to install another complement to the device, such as a first flush diverter.

Soil ridges are built to capture and discourage rainwater from flowing downstream to increase drainage in arid areas. Even in times of low precipitation, adequate water is needed to raise crops. Water from roofs is stored and tanks can be built to store vast volumes of rainwater. Sustainable planting and small-plot cultivation are other uses of this free-standing rainwater harvesting approach.

FAQs about Conservation of Water

Ans. A very important part of irrigation is water. Plants often suck up a lot of groundwater, so it is important to replenish groundwater. Optimum water quality requires minimizing losses due to evaporation, runoff, or subsurface drainage for field irrigation while optimizing output. Some of the irrigation practice which is trending are drip irrigation, furrow irrigation, flood irrigation and many more.

Ans. Water wastage (also referred to as ‘water waste’ in the US) is the flip side of water management. It involves inducing or allowing water to be drained without any practical intent in household applications. Inefficient use of water is inefficient, too. Water management agencies are usually slow or unable to give the often-ambiguous idea of water pollution a concrete description.

Ans. Greywater is domestic water that can be collected and is useful for showers, washing dishes, and laundry. Water from the toilet is not greywater.