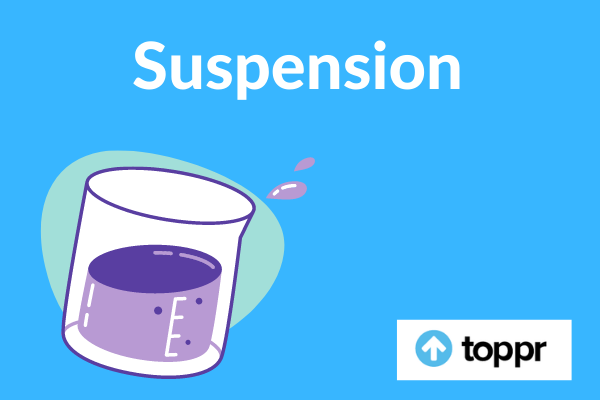 In chemistry, the suspension is a heterogeneous mixture of a fluid that includes solid particles that are sufficiently large for sedimentation. These particles may be visible to the naked eye. Usually, they are larger than one micrometre, and may gradually settle, but the mixture is only known as a suspension when and, while the particles do not settle down.

General characteristics and the properties of suspensions are:

1)The suspension is a heterogeneous mixture in which solvent molecules do not dissolve. They are suspended throughout the solvent in bulk and are left to float loosely in the medium. The internal phase (solid) is distributed in the external phase (fluid) by means of mechanical agitation, through the use of some excipients or suspended agents.

3)The suspension of liquid droplets or of small solid particles in a gas is aerosol. In the atmosphere, suspended particles are called particulate matter and consist of fine dust and soot particles, sea salt, biogenic and volcanogenic sulphate, nitrates and cloud droplets.

4)Suspensions categorize on the basis of the dispersed phase and the dispersion medium, where the former is basically Solid, and the latter may be either solid, liquid or gas.

5)In modern chemical process industries, many novel suspensions production involves using high-shear mixing techniques. Suspensions are thermodynamically unstable but can be stable over a longer period of time, kinetically, which defines the suspension’s shelf life.

6)”Dispersion stability is the ability of a dispersion to resist any change in its properties over time.”

7)The size of the solvent particles in the suspension is quite large. Their size is usually more than 100 mm in diameter.

Below given are a few examples of suspensions;

What is a Solution?

The solution shows various properties, given below are a few properties:

You can see a lot of examples of solutions in your daily life. Here are a few examples of a solution –

What is a Concentrated Solution?

The proportion of solutes and solvents may vary. On the basis of the grading of solute present in the solution, it may be dilute, concentrated or saturated. Diluted and concentrated are comparative terms.

Although suspension and colloidal suspension (solution) are also different types of mixtures, It tends to be homogeneous due to a smaller particle size than the suspension. It also reflects the Tyndall effect.

Q1. What are the different types of colloidal solutions?

Answer. There are various types of colloidal solutions they are:

Q2. What is the difference between suspension and colloids?

Answer. The difference between suspension and colloids are;

Q3. Give a few examples of suspension.