The existence of chemicals in the environment detrimental to the safety of humans and other living organisms, or that inflict damage to the ecosystem or materials, is air pollution. Gases (such as mercury, carbon monoxide, sulphur dioxide, nitrous oxides, methane, and chlorofluorocarbons), particulates (both organic and inorganic), and biological molecules occur in various types of air contaminants. Air exposure can cause humans to suffer from infections, asthma, and even death; it can also damage other living species, such as livestock and food crops, as well as harm the natural environment.

A mixture of gases that together form the atmosphere is responsible for maintaining all living things; the imbalance which is caused by the rise or decrease in the percentage of these gases may be hazardous to survival. As per The Blacksmith Institute World’s Most Contaminated Areas survey, indoor air pollution, and low urban air quality are two of the worst toxic pollution concerns in the world. 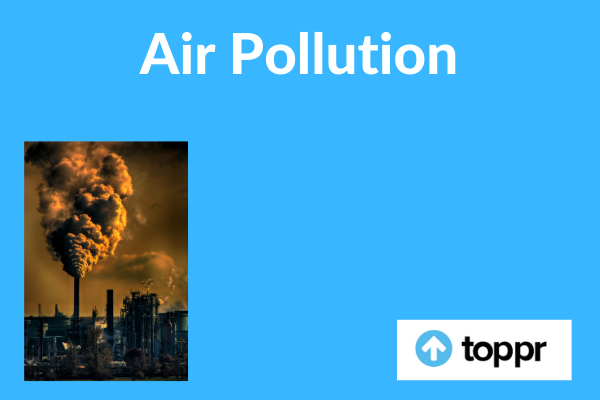 The material in the environment that may have harmful effects on humans and the ecosystem is an air pollutant. The substance can be strong crystals, liquid droplets, or gases. A pollutant can be of natural or man-made nature. Pollutants are categorized as secondary or primary. Some of the pollutants are:

Health problems may include trouble breathing, wheezing, coughing, asthma, and deteriorating respiratory and cardiac conditions. Children whose age is less than five years that live in developing countries are the most vulnerable population in terms of total deaths attributable to indoor and outdoor air pollution.

How To Reduce Air Pollution

To decrease air emissions, numerous pollution management technology and techniques are available. Land-use planning at the most specific stage is likely to include zoning and planning of transport infrastructure. Land-use planning is an important aspect of social policy in most developing nations. It means that users of land are successful for the benefit of the broader economy and community as well as to protect the environment.

Because the burning of fossil fuels such as coal and oil produces a significant proportion of air emissions. Eliminating these fuels will significantly reduce air pollution. The potential of titanium dioxide to decrease air pollution. Ultraviolet light releases free electrons from the substance and thereby creates free radicals that break down VOCs and NOx gases. One form is super hydrophilic. The transition to green energy is a very efficient way of mitigating air emissions.

An electrostatic precipitator (ESP) or electrostatic air cleaner is a particulate collection system that uses the force of an induced electrostatic charge to extract particles from a flowing gas (such as air). Electrostatic precipitators are highly effective filtration systems that minimally obstruct gas flow through the device and can extract small particles from the air stream quickly, such as dust and smoke. Wet scrubbers are a type of technology for pollution control. The phrase defines a collection of devices that use emissions from or from other gas sources from a furnace flue gas.

Ans. Acid rain, or acid deposition, is a general term that encompasses any type of acid product precipitation, such as sulfuric or nitric acid, which, in wet or dry forms, falls from the atmosphere to the ground. This can involve acidic rain, snow, fog, hail, or even ashes.

Ans. for the last one or two decades, the pattern of rising average air temperatures near the Earth’s surface. Since the mid-20th century, climate scientists have control and transparency measurements of different environmental patterns (such as temperatures, precipitation, and storms) and specific climate factors (such as ocean currents and the chemical makeup of the atmosphere).