Can you believe that marine organisms can produce haloarenes? Marine organisms that can use chloride and bromide available in the ocean waters are capable of producing haloarenes. They have been known to exhibit several medicinal properties. Thus, various reactions of haloarenes occur artificially as well as in nature.

Reactions of haloarenes or reactions of aryl halides are mainly of 3 types:

In case of haloarenes, π – electrons present in the benzene ring undergo conjugation with the halogen atom present in the haloarene structure. This results in resonance and development of partial double bond in the C-X bond. The partial double bond cleavage of a haloarene is more difficult than a haloalkane. Thus, haloarenes cannot be cleaved by a nucleophile easily and they are less reactive towards a nucleophilic substitution reaction.

The Difference in Hybridization of Carbon Atom in C-X Bond

Therefore, sp2C has a greater capacity of withdrawing the electrons of the C-X bond and holding it tightly to itself. Thus, the bond length is shorter in case of haloarenes than haloalkanes. Shorter bond length results in a stronger bond. For instance, C—Cl bond length in haloalkane is 177pm whereas in haloarene it is 169 pm. 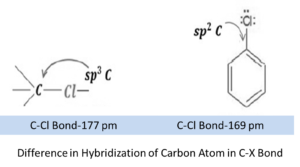 The breaking down of a C-X bond in haloarenes results in the formation of phenyl cation and X−. The resultant phenyl cation is highly unstable because the positive charge is present on the electronegative sp2 C atom. Moreover, it cannot obtain stability by electronic displacement effects such as resonance. Additionally, an SN1 reaction is not possible due to unstable carbocation.

Therefore, instability of phenyl cation decreases the reactivity of the haloarene towards nucleophilic substitution reaction. Phenyl cation instability is quite similar to vinyl cations. In both the cases, the carbonation is present on the sp2 hybridized electronegative carbon atom. However, the stability of benzyl cation is quite similar to allyl cation. In both the cases, resonance effect help in the stabilization. 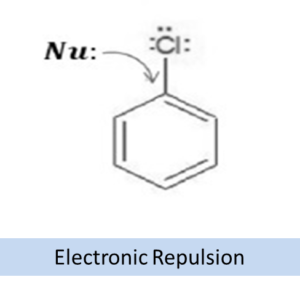 Conditions when Haloarenes are Reactive

For example, a haloarene such as a chlorobenzene can react to form phenol in drastic or extreme conditions. Chlorobenzene undergoes reaction to form alcohol under a temperature of 623K and a pressure of 300 atm. The haloarene reacts with NaOH in these conditions and forms phenol by substitution of chlorine group by OH group. However, if an electron withdrawing group is present in the haloarenes, these haloarenes become more reactive towards nucleophilic substitution reaction. This means if an electron withdrawing group such as −NO2 is present in the ortho, para, and both ortho- and para- positions then the reactivity of the reaction increases in much lesser drastic conditions. A nucleophile approaches and attacks the C-X bond and the π –electrons move in a manner that the electron density delocalizes in the benzene ring at Ortho- and the Para position. If an electron withdrawing group is present in such a case at the Ortho and the Para positions of the benzene ring then it will stabilize the negative charge on the carbon atom by withdrawal.

A series of fast and slow step will occur in the reaction and result in the formation of a high resonance stabilized sigma complex. Finally, in the end, the π –electrons will be restored when the negative charge will delocalize by eliminating the Cl bond. Finally, the product will be formed. Read the below example to further understand the mechanism of nucleophilic substitution reaction. The type of reactions in which an electrophile substitutes another electrophile in any organic compound is known as electrophilic substitution reaction. An electrophile means an electron seeking species. Haloarenes will undergo the usual benzene ring reactions such as nitration, halogenation, Friedel-Crafts reactions and sulphonation.

We know that haloarenes are electron-rich compounds. Therefore, they can undergo electrophilic substitution reaction and the attacking species, in this case, will be an electrophile. The +M effect will result in the concentration of electron density at ortho −and para −positions.

However, electrophilic substitution reactions with respect to the haloarene reactions are slow in comparison to benzene reactions. This is because the halogen group present in haloarenes are deactivating because of the –I effect. Hence, electrons withdraw from the benzene ring. 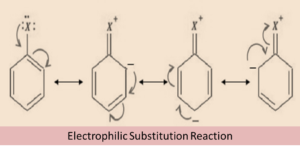 The reactions of haloarenes take place when haloarene react with chlorine in the presence of a solvent (say ferric chloride). The chlorine molecule tends to become polar in nature and develops a slightly positive charge. Thus, the chlorine acts as an electrophile and will attack the electron-rich Ortho and Para position of the compound.

In the below example, nitration of halobenzene will result in the formation of ortho and para substituted products in the presence of nitric and sulphuric acid.  The electrophile, in this case, is NO2+.

In sulphonation SO3 acts as an electrophile. It attacks the electron-rich haloarene at Ortho and Para positions. The reaction results in the formation of Para and Ortho Chlorobenzenesulphonic acids, where Para isomer forms the major product and Ortho isomer forms the minor product. There are generally two types of Friedel-Crafts reaction

In this case, the electrophile is the alkyl and acetonic group because of the positive charge present in the carbon atom. In this reaction, a mixture of alkyl halide reacts with an aryl halide in the presence of dry ether and sodium. The resultant product is alkyl arene. In this reaction, a mixture of haloarenes reacts with sodium in the presence of dry ether. The resultant product is diaryl.

Q: Why does NO2 group is effective only at Ortho and Para positions but not at Meta position?

Solution: When the nitro group is present at Ortho or Para positions, the electron density from the arene structure is withdrawn. This facilitates the attack of a nucleophile group. Moreover, stabilization of carbonation by resonance occurs. The electron withdrawing or the –NO2 group stabilizes the negative charge present in O and P position. However, in case of Meta position any of the resonating structure do not accept the negative charge on carbon atom having the

–NO2 group. As a result, the negative charge at Meta position is not stabilized. Therefore, there is no change seen in the reactivity of the nucleophilic substitution by the presence of –NO2 group. 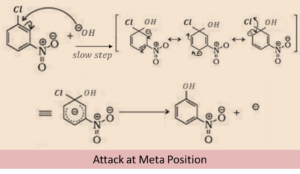 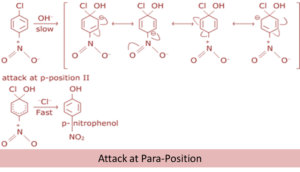