The computer screen on which you are reading this article, the clothes that you are wearing, the food that you eat and even the cars in which you ride all have one thing in common. What is this thing? They all are comprised of some element of carbon. Actually, all organic things are made up of carbon. This is why the study of carbon and its components is so important.

The origin of the name ‘carbon’ is a Latin word ‘carbo’ which means charcoal. This may come as a surprise to you, but it is the fourth most abundant element in the entire universe. And it is the second most abundant element in our bodies, the first being oxygen. As a matter of fact, all organic substances in the world contain carbon in some form or element, which is why it is the base for the entire branch of organic chemistry. 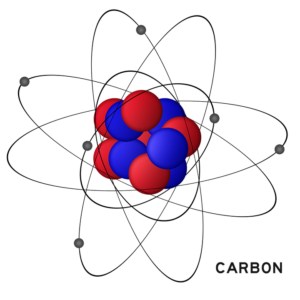 The atomic number of carbon is 6, which represents the number of electrons. It is represented by the symbol C and is a non-metal. It has 6 protons, 6 neutrons and obviously 6 electrons. A carbon atom is considered to be special and unique because it can bond with other carbon atoms to an almost unlimited degree. It is because its atom is very small in size and can conveniently fit in as a part of larger molecules. Each of its atoms has four electrons in its outer shell called valence electrons and can form for chemical bonds with other atoms and molecules.

Uses of Carbon in daily life

Now you may not even notice but carbon is used in so many daily activities. Some of the most important uses are:

So as you can see from the facts given above carbon is an interesting element with uncountable uses. This is why a detailed study of it is essential in Chemistry.

Solution: The correct answer is option “b”. Graphite is an allotrope of carbon. Each atom is covalently bonded to other three atoms. These layers slid over each other easily because of the weak Van der Walls forces between them.