What is the most common haloalkane? It is bromoalkane. There are over 1600 halogenated organic compounds existing today. There are different methods of preparation of haloalkanes and haloarenes. We can trace back the presence of haloalkane to the 15th century. The first haloalkane produced was chloroethane. Later on, in the 19th-century preparation and synthesis of such compounds were done in order to understand organic chemistry and structure of alkanes.

i) The Reaction of Alcohols with Halogen Acid

An organic compound derivative of alcohol reacts with halogen acid (H-X) to form haloalkanes as the major product.

Preparation of chloroalkane is an example of the reaction of an alcohol with halogen acid to form haloalkane. In this case, primary alcohol and secondary alcohol react with HCl acid gas to form haloalkane in the presence of anhydrous ZnCl2, which act as a catalyst in this reaction.

Example of Preparation of Bromoethane from Ethanol

Additionally, the reactivity of haloacids follows the order HI > HBr > HCl > HF. HI is easily and highly reacting haloacid among all of them because the HI bond is weaker than the other three. Therefore, it can be broken easily in comparison to the other halogen bonds to form H+ and I− ions.

However, this preparation method will not be able to synthesize aryl halides/haloarenes. C-OH bond in the phenol structure contains partial double bond character because of the delocalization of lone pair of electrons present on the oxygen atom of the benzene ring. Therefore, the bond formed in the structure cannot be easily broken down by any sort of reaction with haloacids.

ii) The Reaction of Alcohols with Phosphorus halides (PX5 or PX3)

This reaction helps in the formation of Chloroalkanes, bromoalkanes, and iodoalkanes. In this reaction phosphorus halides interchange the functional group of alcohols (–OH) with the corresponding halides. The reaction is as follows:

Note: Fresh preparation of the phosphorus tribromide and phosphorus triiodide is made with red phosphorus and bromine or iodine due to the instability of the compounds. Thus, alcohol reacts with phosphorus trihalides (PX3) to obtain three molecules of alkyl halide. The general overall reaction is

Example: Reaction of ethanol with PCl3 for the formation of chloroethane

iii) The Reaction of Alcohols with Thionyl chloride as Suitable Reagent

This reagent is the most preferred and suitable in between the three reactions of alcohols. Alcohol reacts with Thionyl chloride (SOCl2) to form alkyl chlorides. However, the by-products formed in this reaction are gaseous in nature. Therefore, the by-products can easily escape into the atmosphere, leaving the pure alkyl halide. This method helps in the generation of pure alkyl halide.

2) Preparation of Haloalkanes & Haloarenes from Hydrocarbons

Preparation of Haloalkanes and haloarenes from hydrocarbons is possible by 3 different methods. They are

Alkyl bromides and alkyl chloride formation are possible by the free radical halogenation reaction. However, radicals are very non-selective in nature. Moreover, radicals are non-specific and highly reactive intermediates that result in the formation of the mixture of products.

For instance bromination or chlorination of free radical results in the formation of a number of haloalkanes. This causes difficulty in the isolation of a single product. Therefore it is not the preferred method for the preparation of haloalkanes. Example- When butane reacts with chlorine in the presence of light as energy, a mixture of product formation takes place.

This method helps in the preparation of haloarenes such as aryl bromides and aryl chlorides. Electrophilic substitution forms the aryl bromides and aryl chlorides by using halogens such as chlorine and bromine in the presence of Lewis acid. However, the reaction requires the following of certain specific condition for the generation of proper electrophile.

For example, the reaction should be conducted in presence of Lewis acid. Additionally, the reaction must be carried out in the dark. The reactions to obtain the electrophiles are

The electrophiles in the above reactions are Cl+ and Br+ and HCl and HBr are the by-products of the reaction. Therefore, the electrophilic substitution reaction for the preparation of aryl bromide and aryl chloride is

In the above reaction, two different isomers of the aryl chlorides are formed. They are Ortho and Para isomer. The π-electron in the benzene ring attacks the Cl+ electrophile to produce an intermediate complex. However, the H+ bond from the intermediate complex moves in order to compensate for the positive charge of the carbon atom.

Thus the reaction forms two different isomers of the product-ortho and para. The melting points of both the isomer differ significantly. And para-isomer has the higher boiling point than ortho-isomer. Therefore, they can be easily separated from each other.

Preparation of aryl chloride and bromide is possible from this reaction. Aryl fluoride formation is not possible due to the high reactivity of the halogen fluorine. Additionally, iodine reaction is also not possible as iodine is reversible in nature. Thus, it requires a strong oxidizing agent such as Conc. HNO3 or HIO4 for the oxidation of HI and converting it to I2. Therefore, driving the reaction in forwarding direction is difficult and requires a strong oxidizing agent

Sandmeyer’s Reaction is a two-step method which includes:

Primary aromatic amine reacts with sodium nitrite in the presence of cold mineral acid to form the diazonium salt. In this case,  HNO2 is prepared within the reaction by reacting sodium nitrite and HX in the temperature of 273-278K. 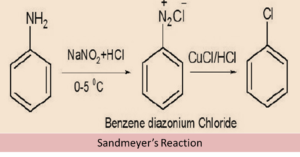 Mechanism of the Sandmeyer’s Reaction

In the first step-

The HNO2 formed in the presence of H+ undergo protonation to form NO+ as the electrophile. The lone pair of the atom from the primary amine will react with the electrophile.to form an intermediate compound which further gives diazonium salt after elimination of H2O. In the second step, the diazonium salt reacts with cuprous halide to form the respective aryl halide i) Addition of HX

Alkene can be converted to haloalkane by an electrophilic addition reaction. Alkene reacts with HX to form R-X. The order of reactivity of halides with respect to alkenes follows the order HI > HBr > HCl > HF. The general reaction will be

The reaction, in this case, is an example of a regioselective reaction. In this type of reaction, we get products in major and minor quantity. Additionally, the reaction follows Markovnikov′s rule of addition for the determination of the major product by the addition of across the double bond of the alkene.

According to Markovnikov’s rule, in an addition reaction of unsymmetrical alkenes, the negative part of the reagent or halogen will attach itself to the carbon that contains less number of hydrogen atoms. For example, prop-1-ene reacts with hydrogen bromide to form 2-bromopropane as a major product.

There is another possibility where the reaction contradicts Markovnikov’s rule. This effect is known as Peroxide effect/ Kharash effect/ anti-markovnikov’s rule. In this reaction, alkene reacts with HBr in the presence of peroxide. The Br- or the negative part of the reagent will attach itself to the carbon having more number of hydrogen atoms. For example, Prop-1-ene reacts with hydrogen bromide to form 1-bromopropane as a major product in the presence of peroxide.

Similarly, alkenes can also react with halogens (X2). For example, Bromine reacts with an alkene in the presence of carbon tetrachloride (CCl4) to form vic-dibromide.  It is a common test to determine a double bond or an alkene compound. The reaction will release reddish brown colour during the reaction.

The last method of preparation of haloalkane and haloarene is halogen exchange reaction. In this reaction, an alkyl chloride or alkyl bromide reacts with sodium iodide in acetone to form alkyl iodides.

The reaction is an equilibrium reaction so there is a possibility of forming other products. The solubility difference of alkyl halides in acetone is used for driving the reaction in the forward direction. We know that sodium iodide is soluble in acetone but NaCl or NaBr are insoluble. Therefore, they precipitate out in the reaction which is easy to remove from the reaction mixture.

In this reaction, alkyl fluorides formation is possible by heating of Alkyl fluorides RBr/RCl. The reaction is carried out in the presence of metallic fluoride such as SbF3, Hg2F2, AgF, CoF2.

Q: Why the reaction given below takes place in the dark? 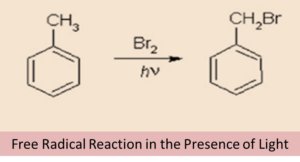