By now, you know a lot about the group 17 elements. Do you remember what they are commonly called as? Yes! You are right! It’s halogens. So, what are we going to read about today? In this chapter, we will cover the concept of oxoacids of these elements, halogens. It is an important chapter as these oxoacids are very important compounds. Before we begin, let us have a brief recap of what we know about these group 17 elements.

Group 17 elements are fluorine, chlorine, bromine, iodine, and astatine from the top to the bottom of the group. We know them by “halogens” because they are salt producers. The members of this group are highly similar to each other. They exhibit a regular pattern in the physical and chemical properties. Did you know that astatine is the only radioactive element in the group? All of these elements have seven electrons in their valence shell. Their electronic configuration is ns2 np5

We can see that they are one electron less from the nearest noble gas or octet configuration. These elements have a small size because of their effective nuclear charge. Hence, these do not possess the tendency to lose electrons. As a matter of fact, they gain an electron easily and complete their octet configuration. Halogens produce several oxoacids. These are nothing but the acids containing oxygen in the acidic group.

You may ask, what are oxoacids? An oxoacid is a compound having hydrogen, oxygen, and no less than one other element. These do not have any lesser than one hydrogen molecule bound to oxygen. This hydrogen is capable of separating into the H+ cation and the anion of the acid.

The fluorine atom is extremely small and thus, it is highly electronegative. Therefore, it can form a single oxoacid, HOF which is fluoric(I) acid or hypofluorous acid. The other elements of the halogen family produce several oxoacids.

Structures of the Oxoacids of Halogens 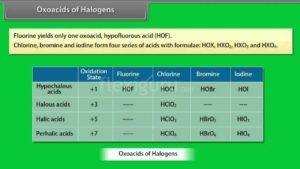 The central atom in the oxoacids is sp3 hybridized. Every oxoacid has essentially one X-OH bond. Whereas most oxoacids have X=O bonds present in them.

Q: Is hydrochloric acid an oxoacid?

Ans: No. Hydrochloric acid is a hydro acid.