Two Names for Every Compound

The functional group will form suffix or prefix depending upon the priority series.

Step by Step Rules of Nomenclature

The common name of haloarene- Aryl Halide. IUPAC Name- In this nomenclature system, the naming of numerical prefixes depends on the basis of the position of the halogen atom in the aromatic ring. 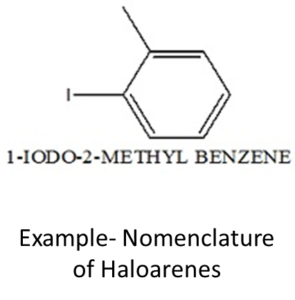 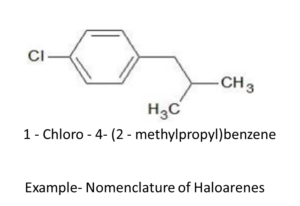 Nomenclature of Some Compounds

The dihaloalkanes having identical halogen atoms are termed as alkylidene or alkylene dihalides. They can be divided into two types:

It is essential to understand the nature of C-X bond because it determines the reactivity of compound having this kind of bond. The C-X bond is highly polar in nature because halogen atoms are electronegative and the carbon atom is electropositive. The difference in electronegativity results in withdrawal of electron density from sigma bond pair towards the halogen atom.

This result in polarization of C-X bond is polarized in a manner that the carbon atom develops partial positive charge whereas halogen atom in the bond develops a partial negative charge. Therefore, the carbon-halogen bond of any alkyl halide is polarized. This is represented as

Nature of C-X bond depends upon the bond length between the carbon atom and halogen group. We have previously mentioned that size of the halogen group increases as we move down the group (F < Cl < Br < I). Consequently, the difference in the C-F bond will be the smallest and C-I bond will be the largest. It can be represented as

Nature of C-X bond depends upon bond enthalpy order. The size of the carbon and fluorine atom is very similar so the orbitals overlap (2p-2p overlap) into one another. This leads to the formation of a very strong bond. In C-I the atomic size of iodine is very large in comparison to carbon atom so the orbital interaction is very weak.

This results in the formation of weak bond strength. We can conclude that less the bond length stronger will be the bond. Hence, the bond length of C-F is 1.39 A0. The stronger the bond, the amount of energy required increases to break that bond. Therefore, C-F has highest bond enthalpy. The bond enthalpy order is

Dipole moment helps to calculate the polarity of a chemical bond within a molecule. It occurs due to the separation of positive and negative charges. It is the product of both charge and the distance between them. Bond dipole (μ) is given by the formula

Can you notice the abnormal order of the dipole moment in the case where CH3Cl > CH3F? Even though fluorine is more electronegative than Chlorine but the C-F bond (139 pm) is shorter than C-Cl bond C − Cl (178 pm). Thus, the dipole moment will be lower in case of CH3F in comparison to CH3Cl.

Q1: Give the IUPAC name of the compound given below.