Stereochemistry and Reaction of Haloalkanes

It is important to understand optical isomers and their involvement in these chemical reactions.

The instrument that helps in the generation of plane polarized light from an ordinary light is a polarimeter.

Asymmetry of a Molecule

Asymmetry of a molecule also determines whether the molecule will be chiral or achiral. There are objects or compounds that are non-superimposable. These types of objects are known as chiral objects or chiral compound. However, there are many compounds/objects, such as a sphere, that is identical with its mirror image and it is superimposable as well. This type of compounds/objects is called achiral object. Therefore, asymmetry of a carbon atom in a particular molecule will determine the chirality of that molecule. 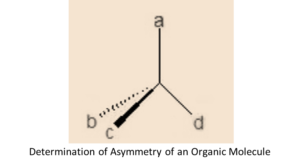 Why are we studying the chirality? This is because it will help us to study about enantiomers. Enantiomers are nothing but the stereoisomers that cannot form superimposable mirror images of each other. Enantiomers have same physical properties such as boiling point,  index of refraction etc. The compounds vary in the manner of rotation of a plane polarized light (dextro or laevo).

However, if the particular composition of a mixture contains an equal amount of both the types of enantiomers, the net optical rotation becomes zero because dextro and laevo cancel out each other. This type of mixture is a racemic mixture and the process is racemization.

Retention of configuration is the ability of an asymmetric carbon to retain the spatial arrangement of the substituents/groups during a chemical reaction. This can only happen when the bond of carbon stereocenter remain intact. Therefore, a substituent will be replaced by other without disturbing the structure. Thus, the relative arrangement of the reactant and the product can be correlated.

For example, the reaction of 2 − methylbutan − 1 – ol upon heating with conc. HCl. 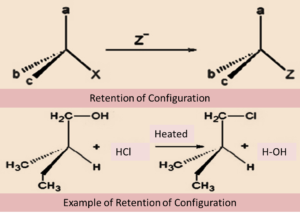 If an asymmetric carbon atom is not able to retain its spatial arrangement during a chemical reaction is known as inversion. An inversion occurs during SN2 reactions. This is because the nucleophile attacks the C-X bond of an alkyl halide by the backside method. As a result of which, the configuration of the molecule gets inverted. Therefore, optically active alkyl halides in an SN2 reaction leads to the inversion of configuration.

Considering the two-step process of  SN1 reactions, we will note that in the first step planar carbocation generation and in the second step attack of a nucleophile occur. The carbocation is planar which allow the nucleophile in the second step to attack the carbon atom either from below or above. This, in turn, results in both configurations- retention, and inversion. 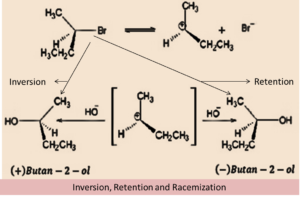 The primary condition for a haloalkane to undergo elimination reaction is the presence of β −hydrogen atom.

Elimination reaction occurs when an alkyl halide reacts with alcoholic KOH solution under heating conditions. The elimination takes place of hydrogen from β –carbon and the elimination of halogen member occur from α –carbon. The reaction will result in the formation of alkene as the final product.

The above reaction mechanism demonstrates a haloalkane. The α –carbon contains a halogen group whereas the β –carbon contains the hydrogen.  When the base reacts with the hydrogen of the β –carbon, bond shifting occurs. Ond shifting results in the elimination of halogen group present in the reactant thereby forming an alkene as the major product and a corresponding by-product.

However, if there is more than 1β −hydrogen atom then multiple eliminations will occur thereby forming multiple alkenes. In such cases, the major product will be the most stable alkenes out of all the alkenes. Generally, the alkene which undergoes most substitution is generally the most stable.  The major product is also known as Zaitsev′s product.

When alkyl halides react with nucleophiles there is a continuous competition whether the elimination or substitution reaction will occur. This mainly depends upon a certain factor which will determine what type of reaction will take place.

In the year 1910, a renowned scientist “Victor Grignard” discovered a special class of organometallic compounds/reagents known as a Grignard Reagent. The Grignard reagent is Alkyl magnesium halide (R-MgX). This reagent formation is possible when a haloalkane (in this case ethyl bromide) react with Magnesium in the presence of dry ether. This will result in the formation of R-MgX.

Therefore, the Grignard reagent is highly reactive in nature. It reacts with an acidic proton bearing compound to produce hydrocarbon. Thus substances such as H2O, R − OH, and R − NH2 are enough acidic and can react with Grignard reagents to form hydrocarbon (RH).

For example, if ethyl magnesium bromide reacts with an alcohol to form the respective hydrocarbon. Anhydrous condition (dry ether) is used in this reaction in order to avoid traces of water.

In this reaction, haloalkane reacts with sodium in presence of dry ether to form hydrocarbons with twice the number of carbon atoms originally present in the reactant.

Solution: The aqueous solution of KOH breaks down into K+ and OH− due to ionization. OH− act as the nucleophile and undergo nucleophilic substitution reaction with alkyl chlorides thereby forming alcohols. Additionally, the highly hydrating property of aqueous solution decreases the basic property of OH−. Thus the reaction is unable to form an alkene.