There are five main types of organic reactions that can take place. They are as follows:

Let us study each of these reactions in detail, to understand more about them. 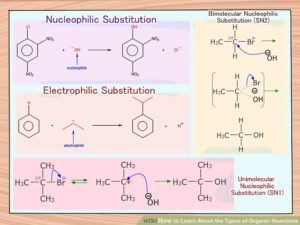 In a nucleophilic substitution reaction, it is important that the nucleophile must have a pair of electrons and it also should have a high affinity for the electropositive species in comparison to the substituent which was originally present in the element. In order for the substitution reaction to occur, there are certain conditions that have to be present such as maintaining low temperatures same as room temperature.

There are certain reactions which involve the elimination and removal of the adjacent atoms. After these multiple bonds are simultaneously formed and there is a release of small molecules as products as a result. One of the examples of a typical elimination reaction is the conversion of ethyl chloride to ethylene.

Most of the organic reactions involve radicals and their movement. Addition of a halogen to a typically saturated hydrocarbon involves free radical mechanism. There are usually three stages involved in a radical reaction which are, initiation, propagation, and termination. Initially when the weak bond is broken initiation of the reaction takes place with the formation of free radicals. After that when the halogen is added to the hydrocarbon a radical is produced and finally, it gives alkyl halide.

Q: In the context of an organic reaction, explain why such reactions take place.

Ans: In case of all organic reactions we can study that during a reaction, the solution will reach an equilibrium that favours the more stable side. In most cases, these will be reaction products as written from left to right, however, sometimes we must predict which side is favoured as in the case of acid-base reactions.

This can be demonstrated through DGº = – RT. In Keq = DH – TDS. If Keq > 1, in this case, the energy is released to the surroundings which are an exergonic reaction, the negative value of DGº, reaction favoured. If Keq, < 1, energy is absorbed from the surroundings which demonstrate an endergonic reaction, positive value of DGº, reaction not favoured.

Energy changes in a reaction can be illustrated by Energy Diagrams in which the highest energy point in a reaction step is called the transition state and the energy required to go from reactant to transition state is the activation energy. If a reaction occurs in more than one step, it must involve species that are neither the reactant nor the final product. Each step has its own free energy of activation.