Chloroform is also known as trichloromethane or methyl trichloride. Chloroform was prepared in the year 1831 by the American chemist Dr Samuel Guthrie. He has done the rudimentary synthesis and it had involved the mixing of whiskey with chlorinated lime. Actually, he was attempting a cost-effective synthesis for the pesticide.

That pesticide was known as Dutch Liquid (the chemical formula is  \(C_{2}H_{4}Cl_{2}\) ). It is an organic chemical compound by nature and initially was in use as an ideal anaesthetic.  It is a colourless chemical and has sweet-smelling, dense liquid property. This chemical may release into the air due to the chlorination process of drinking water, wastewater and swimming pools. This is an industrial chemical that can act as a lachrymator. It is having a non-flammable property, which makes it safer to handle in comparison to ethanol. 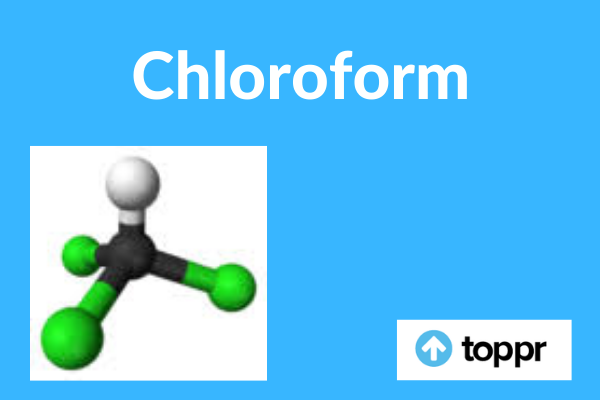 Chloroform having low level may be found in the air as well as in coastal waters, inland rivers, lakes and groundwater. Its level can be higher in the industrial areas and also in the air above swimming pools containing chlorine. Generally, Chloroform is useful as the solvent means a substance that helps other substances dissolve.

It is also useful in the building, paper and board industries as well as in pesticide and film production. Some other areas are as the solvent for lacquers, floor polishes, resins, adhesives, alkaloids, fats, oils and rubber. For refrigeration purposes, Chloroform is used to make Chlorofluorocarbons. Till mid-years of the 1900s, it was used as an anaesthetic to reduce the pain during medical procedures. But, at present, it is not used in this way due to its harmful effects.

Chloroform enters the environment from chemical industries and paper mills. It can also be found in wastewater from sewage treatment plants and the drinking water having added chlorine. This Chlorination of water is being done to destroy bacteria.

Drinking water or eating food having a content of chloroform for a long period may damage the liver and kidneys as well. Touching liquid chloroform may cause sores and skin irritation. According to medical science, chronic exposure to the chloroform may produce dizziness, fatigue, drowsiness, memory impairment, increased dreams, anorexia and palpitations. Slight liver damage may be possible producing higher concentrations of serum prealbumin and transferrin levels.

Chloroform is a transparent liquid having a slightly sweet taste and an ether-like odour. It is a naturally occurring compound, but mostly chloroform that exists in the environment is human-made. It is soluble in water. Today, the USA makes almost all the chloroform for making other chemicals. But it also sells or trades some to other countries too. India is also importing chloroform.

Chloroform is evaporating very quickly with exposure to the air. Since chloroform does not stick to the soil very well. So, it can travel down through the soil to the groundwater level.

In the alkaline media, or with the presence of a solid base, the reaction of chloroform with acetone is very explosive. Also, the mixtures of dinitrogen tetraoxide and chloroform are explosive. Actually, the high reactivity rate of halogens makes polyhalogenated organic compounds, which is a very important class of chemicals. Chloroform belongs to this family of compounds. Although such compounds have been found to have adverse effects on the environment and the human body both. Still, the industries continue to use these compounds owing to their high utility and wide range of applications.

Mostly chloroform present in the air breaks down, but with very slow speed. Its breakdown products in the air include phosgene and hydrogen chloride. These two are very toxic. Also, some chloroform may break down in the soil.

In humans, it affects the central nervous system directly. Also the organs like the liver and kidneys after its intake into the body to a greater extent. A large quantity of chloroform may cause sores in the skin during direct contact.

Q.1: What is the nature of chloroform- acid or base?

Answer: The colour is compared to the 2 mL blank of distilled water having a pH range in 5.0 – 7.0. If the sample solution is discoloured i.e. yellow relative to the blank i.e. blue-green, the deuterated chloroform is acidic.

Answer: Chloroform effectively can make a human unconscious by disrupting the major functioning of intercellular protein synthesis. Doctors are using a cloth mask having a constant drip of chloroform (or sometimes ether) onto it. Further, it is placed over the nose and mouth with a wireframe, to knock someone out with chloroform.

Q.3: How chloroform is affecting the human body?

Answer: Effects of chloroform on the human body are easily visible. Its local symptoms after chloroform inhalation include shortness of breath, and nose and throat irritation. Its acute inhalation can lead to systemic symptoms like agitation, nausea and vomiting accompanied by ataxia, dizziness, drowsiness.

Q.4: How much chloroform content is toxic to humans?

Answer: The toxic dose of chloroform is 7 – 25 mg/dL i.e. 0.59 – 2.1 m mol/L. At the inhaled concentrations of strength less than 1500 ppm, the physical effects of dizziness, tiredness, and headache are reported. Also, anaesthesia occurs at a range of 1500 to 30,000 ppm. Chloroform generally causes irritation to the respiratory tract.

Q.5: How one can prevent chloroform inhalation?

Answer: Medical people and people from some industries have to work with chloroform. So, such people have to ensure that all other people must be knowing his/her nature of work with chloroform. During the work, must avoid inhalation, and perform all operations in a certified chemical fume hood or other approved ventilated enclosure;  Also avoid contact with it.