Selenium is a chemical element and has the chemical symbol Se. It has an atomic number 34. Selenium is a nonmetal and more rarely a metalloid. The properties of selenium intermediate between the elements above and below selenium in the periodic table i.e., sulfur and tellurium. Selenium has similarities to arsenic. In the Earth’s crust selenium rarely occurs in its elemental state or as pure ore compounds. 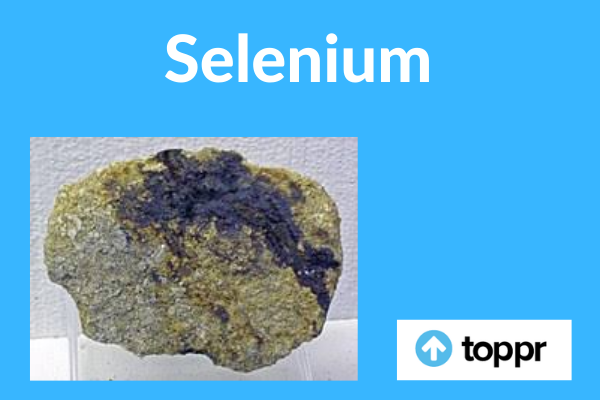 Selenium is a member of the chalcogen family. In the periodic table, selenium is a chemical element that is placed in the oxygen group. Selenium is often present in combination with metals like mercury, copper, silver or lead. Selenium is combined with the physical properties of elements like tellurium and sulfur. This element is rare and composed of 90 parts per billion of the Earth crusts.

Selenium appears in various allotropic forms of which the most popular are – red amorphous powder, a grey crystalline metal, and red crystalline material, which is metallic selenium. The grey crystalline form of selenium conducts electricity much better in the light than in the dark. It can easily corporate in photocells. Selenium burns in air and is easily unaffected by water and dissolves in concentrated nitric acid and alkalis.

In 1817, Selenium was found by Swedish Chemists Jons Jacob Berzelius and Johann Gottlieb Gahn. The word selenium is brought up from the Greek word ‘selene’. The meaning of this word is the moon. Selenium is rarely found as pure ore or in pure elemental form. It is generally found in metal sulfide ores. For commercial use, it is mostly produced as a by-product of the refining metal sulfide ores.

The Occurrence of Selenium in Nature

Selenium is a very rare element. Scientists estimate its abundance at about 0.05 to 0.09 parts per million on earth. Selenium ranks among the 25 least common elements available in the Earth’s crust. It is widely distributed throughout the crust. There is no ore from which selenium can easily be mined with profit. Instead, we get selenium as a by-product of mining other metals. Selenium is produced primarily from copper, iron, and lead ores. The major producers of selenium available in the world are Japan, Canada, Belgium, the United States, and Germany.

The most important uses of selenium are in glass-making and in electronics. Each account for about 30 per cent to 35 per cent of all the selenium produced each year. The addition of selenium to glass can have one of two opposite effects. First, it will cancel out the green colour that iron compounds usually add to the glass while manufacturing. If we want a colourless glass, add a little selenium to neutralize the effects of iron.

Second, selenium will add its colour, a beautiful ruby red, if that is wanted in a glass product. Selenium is also added to glass that is in use in architecture. The selenium reduces the amount of sunlight that passes through the glass.

There is a growing use of selenium in electronic products. One of the most important uses is in paper photocopiers and also in laser printers. The element that is in use to make photovoltaic solar cells is selenium. When light strikes selenium, it converts into electricity. A solar cell is a device that captures the energy of sunlight on tiny pieces of selenium. The sunlight is then changed into electrical energy. Currently, that process is not that efficient. Too much sunlight is lost without being converted into efficient electricity. More efficiently the solar cells are able to make use of all the free sunlight that strikes the planet.

One-third of all selenium is in use as pigments or colouring agents for paints, plastics, ceramics, and glazes. Depending upon the form of selenium, the colour ranges from deep red to light orange.

Selenium is also in use to make alloys. An alloy is made by melting and mixing two or more metals together. This mixture has properties different from those of the individual metals. The addition of selenium to metal makes it machinable. Machinability means working with a metal i.e., bending, cutting, shaping, turning, and finishing the metal. About 5 per cent of all selenium is in use in agriculture. Selenium is added to soil or animal feed to provide the low levels of selenium required by plants and animals.

Question 1: Write a short note on the isotopes of selenium.

Only one radioactive isotope of selenium that is in use commercially is selenium – 75. This isotope is in use to study the function of two organs in the body. The organs are the pancreas and the parathyroid gland. The pancreas helps with digestion and the parathyroid gland gives off hormones. The radioactive selenium element is injected into the bloodstream. Then it primarily goes to one or both of these two organs. The isotope gives off radiation when it reaches organs.

Question 2: Write about the extraction of selenium.

Question 3: Write a short note on the chemical properties of selenium.

Answer: Selenium is a fairly reactive element. Selenium easily combines with hydrogen, fluorine, chlorine, and bromine. It reacts with nitric and sulfuric acids. Selenium also easily combines with a number of metals to form compounds called selenides. An example is magnesium selenide. One of its interesting reactions is with oxygen. It burns in oxygen with a bright blue flame to form selenium dioxide. Selenium dioxide has a characteristic odour of rotten horseradish. Selenium and tellurium are associated with each other. They both tend to occur together in the Earth and somewhat have similar properties.