Silver (Ag) is a chemical element. It is a lustrous white metal that is prized for its decorative beauty and electrical conductivity. Silver is situated between copper (Period 4) and gold (period 6) in Group 11(b) and period 5 of the periodic table. The physical and chemical properties of silver are intermediate between those two metals. 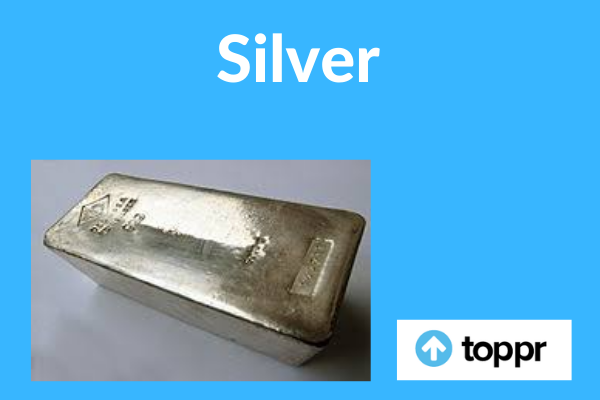 Silver is a chemical element with the symbol Ag. Silver has an atomic number 47. It is a soft, white, lustrous transition metal. The metal silver has the highest and the best electrical conductivity, thermal conductivity, and reflectivity of any metal. The metal is found in the Earth’s crust in the pure, free elemental form of native silver. Silver is an alloy with gold and other metals. Also, in minerals such as argentite and chlorargyrite. Most silver is a by-product of copper, gold, lead, and zinc refining.

Silver is one of the precious metals. Silver metal is in use in many bullion coins, sometimes alongside gold. While it is more abundant than gold. Silver is much less abundant as a native metal. The purity of silver is measured on a per-mile basis. A 94%-pure alloy is “0.940 fine”. Silver is one of the seven metals of antiquity. Silver has a long-lasting role in most human cultures.

Other than in currency and as an investment medium silver is in use as coins and bullion. Silver plays a major role in solar panels, water filtration, jewellery, ornaments, high-value tableware and utensils. The term “silverware”, is given in context to electrical contacts and conductors, in specialized mirrors, window coatings. In the catalysis of chemical reactions, silver is a colourant in stained glass and kept in specialised confectionery. The compounds of silver are in use in photographic and X-ray film. Dilute solutions of silver nitrate and other silver compounds are in use as disinfectants and microbiocides. Silver is added to bandages and to wound dressings, catheters, and other medical instruments.

The abundance of silver is 0.08 parts per million in the Earth’s crust. It is almost exactly the same as that of mercury. Silver mostly occurs in sulfide ores, especially acanthite and argentite, \(Ag_2S\). Argentite deposits also contain native silver when they occur in reducing environments. When it comes in contact with salt water, they are converted to chlorargyrite including horn silver, AgCl. AgCl is prevalent in Chile and New South Wales. Most of the other silver minerals are silver pnictides or chalcogenides. These minerals are generally lustrous semiconductors. The truest silver deposits are opposed to argentiferous deposits of other metals, which come from Tertiary period vulcanism.

The principal sources of silver are the ores. The ores of copper, copper-nickel, lead, and lead-zinc. Since 1546, we get this ore from Peru, Bolivia, Mexico, China, Australia, Chile, Poland and Serbia. Peru, Bolivia and Mexico have been mining silver. They are still major world producers. The top silver-producing mines are  Fresnillo (Mexico),  Cannington (Australia), Antamina (Peru), Rudna (Poland), San Cristóbal (Bolivia), and Penasquito (Mexico). Some top near-term mine development projects through 2015 are Pascua Lama (Chile), Navidad (Argentina), Jaunicipio (Mexico), Malku Khota (Bolivia), and Hackett River (Canada). In Central Asia, Tajikistan is has the largest silver deposits around the globe.

The major use of silver besides coinage is in the manufacture of jewellery and other general-use items, this continues to be a major use today. For instance, the table silver for cutlery due to its antibacterial properties.

In medicine, silver is incorporated into wound dressings. It is in use as an antibiotic coating in medical devices. Wound dressings containing silver sulfadiazine or silver nanomaterials are present to treat external infections. Silver is also in use within some medical applications, like urinary catheters where tentative evidence indicates it reduces catheter-related urinary tract infections.

Silver is an important part of electronics for conductors and electrodes on account of its high electrical conductivity even when tarnished. Bulk silver and silver foils are in use to make vacuum tubes and continue to be in use in the manufacture of semiconductor devices, circuits, and their components. For example, silver is in use in high-quality connectors for RF, VHF, and higher frequencies, particularly in tuned circuits such as cavity filters where conductors cannot be scaled by more than 6%.

Silver has a major use in the manufacture of chemical equipment. It is an account of its low chemical reactivity, high thermal conductivity, and is easily workable. Silver crucibles are in use for carrying out alkaline fusion. The equipment that uses silver to work at high temperatures is often silver-plated. Silver and its alloys with gold are very useful in making wire or ring seals for oxygen compressors and vacuum equipment.

Answer: It has long been known that silver’s antibacterial action is enhanced by the presence of an electric field. It is in use as a topical antiseptic. Silver is incorporated into the bacteria it kills. Dead bacteria can be the source of silver that could destroy additional bacteria easily.

Question 3: Does silver react with gold?

Answer: Atoms like Gold and Silver react with one another to form reasonably strong metallic bonds. But surprisingly they have almost no chemical interaction with the atmosphere.

Share with friends
Previous
Conservation of Water
Next
Selenium