So as you know, Dmitri Mendeleev is the father of the periodic table. But did you know the Modern Periodic Table that we use was in fact developed by a scientist named Henry Moseley? Let us learn the fascinating history behind the periodic table. 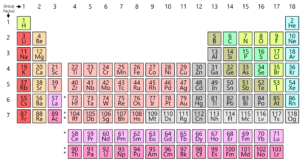 As you know, all the elements found on earth are arranged in a grid or matrix called the Modern Periodic Table. These elements’ arrangement is according to a pattern. The periodic table was actually developed and by Mendeleev in the early 1800’s. However, it was in fact perfected by Henry Moseley, an English physicist in 1913. By making adjustments to the periodic law, he improved on all the flaws of the Mendeleev table. Let us take a look at this development.

First, let us take a look at an atom’s structure. Every atom is made up of a nucleus that consists of protons and neutrons. Here the protons have a positive charge and a neutron has no charge. Now electrons (carrying a negative charge) surround the nucleus. Now the atomic mass number is the total number of protons and neutrons in an atom. And the atomic number is the number of protons in an atom. This atomic number is completely unique to every element which means that every element on the planet has its own unique atomic number.

It was Henry Moseley who suggested a better arrangement than Mendeleev. He arranged the elements according to their Atomic Number rather than their Atomic mass. By doing so he improved upon the previous table and removed some of its difficulties and anomalies.

Mendeleev could never figure out the correct position of Hydrogen in his table. Since hydrogen can either gain or lose an electron it can find a place in Group 1 or 17. Its electronic configuration resembles that of alkali metals. Although it can also combine with metals and non-metals forming covalent bonds like Halogens.

But in the modern periodic table, there is no dilemma. Since the Atomic Number of hydrogen is 1 that is where it finds its appropriate place at the start of the table.

Isotopes are different atoms of an element each of which has the same number of protons, but a different number of neutrons in their nuclei. This implies that although their atomic mass varies, their atomic number is the same. Like for example, Carbon-14 is a radioactive isotope of the carbon atom that has eight neutrons.

Whereas this presented a problem for Mendeleev, since the table depended on atomic mass, it is not an issue with the Modern Periodic table. All isotopes of the elements do not have separate places on the table.

Mendeleev when using atomic mass to arrange elements faced another problem. There were certain cases where there was a breaking of this arrangement so elements with similar properties were in a group together. Take the example of Iodine and Tellurium. Now iodine’s atomic mass is lower than tellurium. And yet Mendeleev put it after tellurium so it could be in the same group as fluorine and chlorine.

In the modern periodic table, the atomic mass becomes irrelevant and elements are grouped with similar elements based on their atomic number.

The modern periodic table solved another problem by placing the rare earth elements such as Cerium, Lanthanum, Erbium etc in a separate table at the bottom of the Periodic table, so as not to interfere with the Periodic Law.

Q: Out of all the 118 elements known to us, how many elements occur naturally?

Sol: The correct answer is option “a”. Out of the 118 elements known to us, 98 occur naturally. Out of these 80 are stable and 18 are radioactive.