Mercury is the only chemical element that is in a liquid state at ordinary temperatures. It is commonly known as quicksilver, silvery-white liquid metal. Mercury can never be created nor be destroyed. However, it can cycle in the environment being a part of both natural and human activities. Mercury metal is also found in many new applications in electrical devices and electrochemistry. Mercury metal is a volatile liquid. It consolidates a measurable vapour pressure at room temperature. 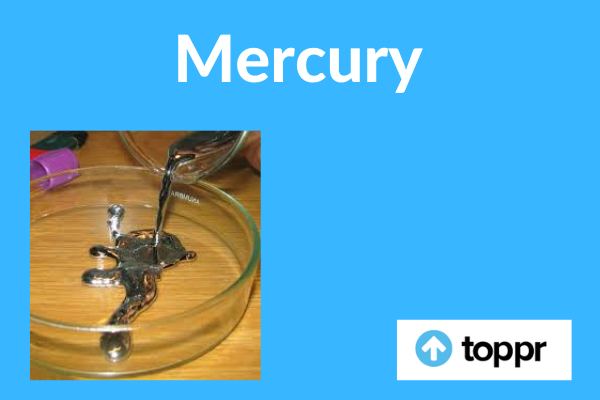 Mercury has a chemical symbol Hg and an atomic number of 80. Mercury was formerly named hydrargyrum. It is a heavy, silvery d-block element. Mercury is the only metallic element that is the liquid state at standard conditions for temperature and pressure. The other element that is a liquid under these conditions is the halogen bromine, though metals such as caesium, gallium, and rubidium melt above room temperature.Mercury occurs in deposits throughout the world as cinnabar i.e., mercuric sulfide. The red colour pigment vermilion is produced by grinding natural cinnabar or synthetic mercuric sulfide.

It is in favour of alternatives such as alcohol or Galinstan filled glass thermometers and thermistor or infrared-based electronic instruments. Mechanical pressure gauges and electronic strain gauge sensors have dominated over mercury sphygmomanometers and became a  bit outdated.

Mercury remains in use in scientific research applications and also in amalgam for dental restoration in some locales. It is also in use in fluorescent lighting. When electricity is passed through mercury vapour, it produces short-wave ultraviolet light in a fluorescent lamp. By this, it causes the phosphor in the tube to fluoresce making it visible light. Poisoning of mercury can result from exposure to water-soluble forms of mercury, by inhalation of mercury vapour, or by ingesting any form of mercury.

3) Although preliminary experiments on copernicium and flerovium have shown that they have even lower boiling points. On the freezing, the volume of mercury decreases by 3.59% of its original and its density changes from \(13.69 g/cm^3\) when liquid to \(14.184 g/cm^3\) when solid.

6) Solid mercury is malleable and ductile and can easily be cut with a knife.

8) The electronic configuration of mercury strongly resists the removal of an electron. It forms weak bonds and hence melts at low temperatures. The stability of the 6s shell in mercury is due to the presence of a filled 4f shell. The f shell in mercury poorly screens the nuclear charge and increases the attractive Coulomb interaction.

9) This interaction is of the 6s shell and the nucleus of the mercury. The absence of an inner f shell that is filled is the reason behind the higher melting temperature of cadmium and zinc. Although both cadmium and zinc still melt easily and have unusually low boiling points.

1) The element mercury does not easily react with most acids like dilute sulfuric acid. Although oxidizing acids like concentrated sulfuric acid and nitric acid or aqua regia dissolve it to give sulfate, nitrate, and chloride. Like silver, mercury easily reacts with atmospheric hydrogen sulfide. Mercury reacts with solid sulfur flakes that are present in mercury spill kits to absorb mercury. These spill kits are in use as activated carbon and powdered zinc.

2) Mercury dissolves in many metals like gold and silver to form amalgams. Iron is an exception as if iron flasks are traditionally been in use to trade mercury.

3) Sodium amalgam is a reducing agent in organic synthesis. That why it is in use in high-pressure sodium lamps.

4) Mercury easily combines with aluminium to form a mercury-aluminium amalgam. Thou amalgam destroys the aluminium oxide layer that protects metallic aluminium from oxidizing in-depth as in iron rusting. Although small amounts of mercury can corrode aluminium. That’s the reason why mercury is not allowed to board an aircraft under most circumstances. It is the most common type of liquid metal embrittlement.

Question 1: What are the applications of the chemical element Mercury?

Answer: Various applications of mercury metal are as follows –

Question 2: Explain the effects of mercury on health and the environment.

Answer: The health effects of mercury are

Question 3: How mercury exists in nature?

Answer: In nature, mercury is rarely present in its pure form. It is a liquid metal, but rather in compounds and inorganic salts. Mercury is extracted as mercury a cinnabar ore or sulphide. Cinnabar deposits are the source ores for the commercial exploitation of metallic mercury throughout history.