Science has made some giant leaps in the last century. Some stunning discoveries and inventions. In the field of chemistry also startling discoveries have been made. But none as significant as the Modern Periodic Table. But it was a long road to get here. Let us take a journey and look at the earlier attempts at classification of elements.

Earlier Attempts at Classification of Elements

As said before the journey to our current periodic table was a long and arduous one. Many scientists and chemists tried to attempt to classify the elements in a logical way. The first and most apparent one was to classify all elements into metals and non-metals. The concept of metalloids was still non-existent. But many scientists and chemists went a step further to find a more sophisticated system of classifying the elements. Some were more successful than others. Let us take a look at few of these attempts.

A German chemist and professor, Dobereiner’s attempt at classification of elements are generally considered the first recorded attempt. He identified elements with similar properties and grouped them into groups of three, hence the name “triads”. He realized when you arrange these three elements according to their atomic weight, the atomic weight of the second element was roughly the average of the atomic weights of the first and third element.

So Doberiener had clubbed Lithium (Li), Sodium (Na) and Potassium (K) together in a triad. The atomic weights of Li and K are 6.9 and 39. And the atomic weight of Na is in fact 23 which is very close to the average of the other two. However, Dobereiner soon found out that this was not uniform across all elements, and so this system had very short-lived and limited success.

Will you believe that chemistry and music have a connection? That’s right. An English scientist by the name of John Newlands tried to classify the elements in a unique manner. He first started by arranging all the elements in a ascending order according to their atomic weights. Hydrogen being the lightest was obviously first. And at that time only 56 elements were known, the last one being thorium.

After arranging the elements so, Newland discovered that the first and the eight elements showed similar properties and characteristics. He compared this to the eight octaves of music (do, re, mi, fa, sol, la, ti) where every eight note is similar to the first. Hence this classification came to be known as Newland’s Law of Octaves.

However, there were a number of faults with the classification. To begin with, the law was only applicable up till Calcium. After calcium, every eighth element did not share similar properties to the first one. Also as new elements were discovered and the number expanded from 56, they did not fit into the law. Newland had also adjusted two elements into one slot and paired together some very unlike elements in order to make the classification work. Ultimately this classification also failed to leave a lasting impression. 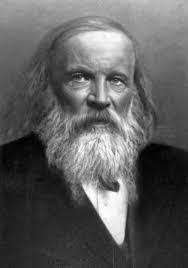 Now, this was the most successful attempt among all the earlier attempts at classification of Elements. In fact, Dmitri Mendeleev is known as the “father of the periodic table”. It was due to his endeavours at classification that we have our current periodic table. Mendeleev started his work in the 1800’s when 63 elements were known to chemists. So Mendeleev first noted down the chemical properties of all the 63 elements on cards.

One of the most successful aspects of this Mendeleev Table was that he was able to identify a few missing elements whose discovery still had to happen. After careful study of the atomic masses of elements, Mendeleev could actually recognize a few elements occurring between the known elements.

Despite its success, there were still a few shortfalls in the Mendeleev’s Table. Firstly he failed to place the Hydrogen correctly on his table. Hydrogen exhibits properties of both alkali metals as well as those of halogens, so to assign it one position was difficult. Also, isotopes of elements were proving to be a problem. They would occupy multiple positions on the table since all their atomic masses are different.

So although Mendeleev came very close there were still improvements that were made, and many years to pass till we arrived at the modern periodic table that we know and learn today.

Q: Mendeleev used a Sanskrit numeral before the names of the predicted elements. What is this term?

Sol: The correct answer is option “b”. The Sanskrit numeral used before the names of the predicted elements was Eka, which means one.