Elements are the building blocks for all the matter you see in the world. Now, the question is how can you distinguish these elements? The answer is “atomic number.” Every element has a unique atomic number that helps to distinguish between elements. Let us study further to know about its significance.

It was not until Wilhelm Röntgen and his discovery of X-rays in 1895 that helped other scientists to further research on Mendeleev’s discovery. English physicist H.G.J. Moseley in 1913 studied wavelengths of X-rays emitted by different chemical elements. Moseley hypothesized the modern periodic table given by Mendeleev was on the basis of the number of protons in the nucleus of an atom.

And this hypothesis forms the basis of atomic number. Each element has a unique number. This number represents the number of protons in the nucleus of an atom.

The total number of protons present in the nucleus of every atom of a chemical element represents the atomic number of that element. Each element is characterized by a unique atomic number.  It is represented by the letter “Z.”

We know that an atom consists of protons, neutrons and electrons. Also, it does not have any net charge. Thus, it is electrically neutral. This means that the number of electrons is equal to the number of protons present in an atom. Therefore,

Furthermore, atomic numbers are whole numbers. Because it is the total number of protons. And protons are generally units of matter. As a matter of fact, it ranges from 1 to 118. It starts with hydrogen and ends with the heaviest known element, Oganesson (Og).

Theoretically, atomic numbers can be increased if more elements are discovered. However, with the addition of more number of protons and neutrons, the elements become prone to radioactive decay.

It does not matter how many neutrons and electrons are present in an atom. The Z is always determined by the number of protons. For example,

From the given information, we can find out the atomic number of an element in the following ways. 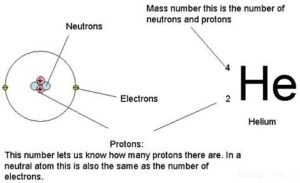 Question 2: What is the Z of chlorine?

Solution: The correct answer is “C”. The Z of chlorine is 17 because the number of protons in a chlorine atom is 17.