People often think that sodium carbonate and sodium bicarbonate are the same things. But, the reality is different as both the compounds are made up of sodium but their uses are different. Also, to understand them better we need some knowledge about both of them.

To put it simply, sodium carbonate is an inorganic compound. Its colour is white in all its forms. 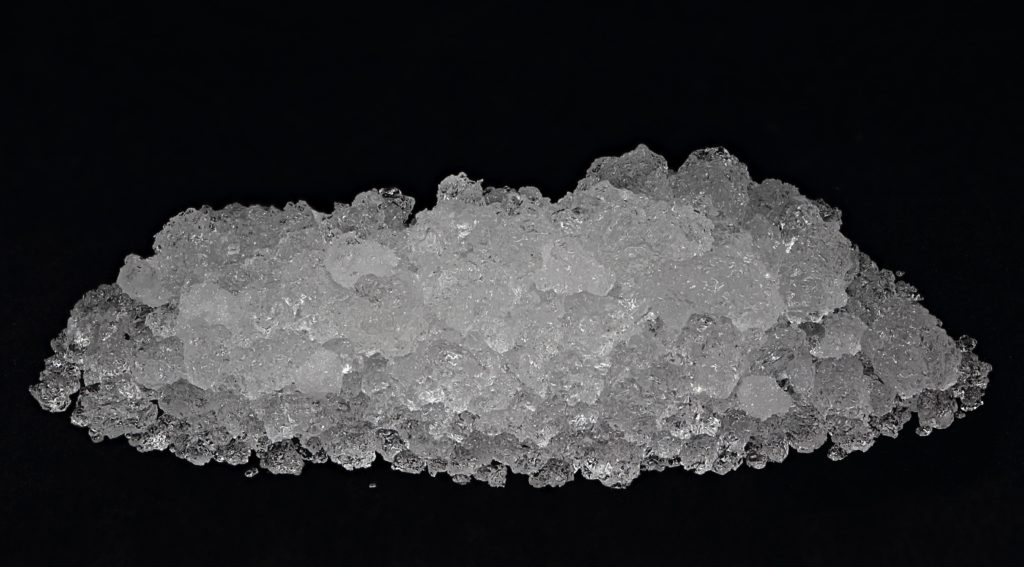 What is Sodium Carbonate?

Besides, we can find them in places where the lake have evaporated and we find them there in the form of deposits.  In addition, it is one of the most common industrial chemicals.

The formula of sodium carbonate happens to be  Na2CO3. In addition, all its forms are water-soluble salts and white in colour. Furthermore, all its form has an alkaline taste also in the water they are moderately alkaline.

If we look historically then at that time it was extracted from the ashes of plants that grow in sodium-rich soils. Furthermore, these ashes are far different from ashes of wood and that’s why it is called soda ash.

Sodium Carbonate can be obtained in three hydrates and an anhydrous salt: 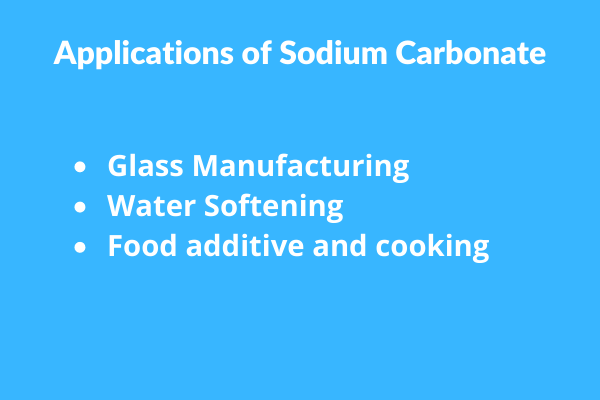 Applications and Uses of Sodium Carbonate

It functions as a flux for Silica, to lower the melting point of the mixture to something achievable without special materials. This “soda glass” is somewhat water-soluble, so calcium carbonate is added in the melt mixture to make glass insoluble. Window glass (Soda-lime glass) and bottle are made by melting mixtures of sodium carbonate, silica sand, and calcium carbonate. When we heat these materials the carbonates release carbon dioxide. Besides, for century’s soda-lime glass was the most common form of glass in use.

We use it to soften water by removing Mg2+ and Ca2+. In addition, these ions form insoluble solid precipitates upon treatment with carbonate ions:

Emission of particulates from calciners and dryers are controlled with venturi scrubbers or cyclones. The exiting gases makes it difficult to use baghouse-type filters. However, the fallout from the decreased polluting potential of sodium carbonate recovery from natural deposits was seen in fall 2000, with the closure of the last North American Solvay plant that has been operational in Amherstburg, Ontario. Besides, the last Solvay plant closed down in 1986.

In food items, sodium carbonate (E500) is used as an acidity regulator, anti-caking agent, and stabilizer. Also, it is a component of Kansui, a solution of alkaline salts that gives ramen noodles their characteristic flavor and texture.

Further, we use it in the production of snus to stabilize the pH of the final product and in the production of sherbet powder. The endothermic reaction of the fizzing and cooling sensation between sodium carbonate and a weak acid (citric acid), which releases carbon dioxide gas, which happens when sherbet is moistened by saliva.

In China, they use it to replace lye-water in the crust of traditional Cantonese moon cakes, and in many other Chinese steamed buns. Sometimes, we use it in place of sodium hydroxide for leying, especially for German pretzels and lye rolls. The home cooks and restaurants make sodium carbonate for culinary purposes. Also, baking soda can be easily converted to NA2Co3 in conventional kitchen ovens.

In various fields, we use it as a strong base. Being a common alkali, it is preferred in many chemical processes because it’s cheaper and safer than NaOH. Moreover, it is suitable for domestic applications. Its common uses are- a common additive in swimming pools, and aquarium to maintain pH. Dyeing with fiber-reactive dyes to ensure proper chemical bonding of the dye with plant fibers.

Sodium bicarbonate (NaHCO3) or baking soda, also a component in fire extinguishers, often generates from sodium carbonate. Besides, in a related reaction, we use sodium carbonate to make sodium bisulfite (NaHSO3), which we use for the ‘sulfite’ method of separating lignin from cellulose. Also, this reaction is exploited for removing sulfur dioxide from flue gases in power stations.

Combustion products emitted from direct-fired process healing units (soda ash dryers) are a source of soda ash. Hou’s process eliminates the production of calcium chloride since ammonia no longer needs to be regenerated. So, the byproduct ammonium chloride can be sold as fertilizer.

Also, Innova Corporate supplies NA2Co3 in Belgium, importers, and distributors in India due to its superior quality and results.

We use sodium carbonate in toothpaste as a foaming agent and abrasive that temporary increase in mouth pH. Besides, it is water-soluble and can occur naturally in arid regions. Since ancient times, in Egypt, they have mined mineral natron deposits from dry lake bottoms, which they use in preparing mummies and early manufacture of glass.

Ol Doinyo Lengai, Tanzania’s sole volcano that erupts NA2Co3. Also, it is presumed to have erupted from other volcanoes in the past. But, due to these minerals instability at the earth’s surface, they are likely to be eroded. Further, all three mineralogical forms together with trona, trisodium, and hydrogen carbonate dehydrate occurs in Kola Peninsular in Russia.

Extraterrestrial sodium carbonate has been identified in the bright spots on Ceres. However, there are carbonates on Mars that are expected to include sodium carbonate. The Martian soil has a low pH in aqueous solution.

Recently, scientists have discovered nahcolite which is a naturally occurring sodium bicarbonate that is a dry mined and recrystallized for a sodium bicarbonate product. For well-defined nations, suitable deposits of these minerals are substantial for producing sodium carbonate as it requires half the capital cost of a similar size Solvay plant.

Initially the selection of plants that show, dyeing properties were selected for cultivation and laboratory trials. After that, a dying method was developed for plant dyestuffs testing to obtain a suitable and diverse palette.

Sodium carbonate is supplied in bulk bags of 25 kg or 750 FIBCs.

Nearly all the domestic consumption of sodium carbonate is mined in several areas of the US. Large deposit found in 1938, one near Green River, Wyoming made mining more economical in North America. Moreover, there are important reserves of Trona in Turkey. Also, it is mined in Ankara, alkaline lakes such as Lake Magadi, Kenya where hot saline springs replenish the salt in the lake.

Until the early 19th century, several plant species were processed for sodium carbonate in Europe and elsewhere. For this, they harvest seaweed or land plants. Salsola soda (barilla plant) small annual scrub was dried and burned for soda ash.

In Spain, the saltwort plants produce the best barilla. However, in the 18th-century plant soda ash became inadequate and search for commercially viable routes to synthesizing soda ash from salt and other chemicals.

In water, sodium selenate is leached and reduced to sodium selenide, which then oxidized by blowing air through the solution.

Based on the U.S. export data, selected Japanese imported thousands of U.S. dollar sodium carbonate from 1982-83.

Sodium carbonate and sodium bicarbonate form a double-salt known as Na3H(CO3)2 (sodium sesquicarbonate) that has a needle-like crystal structure.

French chemist Nicolas Leblanc in 1792, patented the production of NA2Co3 from salt, limestone, sulfuric acid, and coal. In the Mannheim process, we treat sodium carbonate with sulfuric acid that produces sodium sulfate and hydrogen chloride. After that, the salt cake and crushed limestone were reduced by heating with coal. This conversion involves two parts. Firstly, the carbothermic reaction where the coal reduces the sulfate to sulfide, and in the second stage, the reaction produces sodium carbonate by forming calcium sulfide (CaS).

What is Sodium Bicarbonate?

Baking soda is the common name of the Sodium bicarbonate or sodium hydrogen carbonate. In addition, its chemical formula is NaHCO3. Furthermore, it is a salt that is made up of sodium cation (NA+) and a bicarbonate anion (HCO3-).

Besides, it is a white solid crystalline but appears as a fine powder. Also, it is a little bit salty and its taste resembles washing soda.

The principle element of both Sodium Carbonate and Sodium Bicarbonate is sodium. But, they are two different types of compound and salts.

In addition, both the compound are white in look and even in powder form. Furthermore, they are both bases and react highly in presence of sodium. Also, they occur naturally as a compound.

If we talk about the human body than Sodium carbonate does not have any effect on the human body neither negative nor positive. Besides, Sodium bicarbonate occurs naturally and we use it to neutralize acidity in the blood.

In everyday life, both the compound are very useful. We use sodium carbonate in the manufacturing of glass and soap. In addition, we use it in the swimming pool as a water softener.

While, on the other hand, we use sodium bicarbonate as a conductor and in many chemical processes. Furthermore, we use it in food as lying agents to alter the pH of certain food.

Besides, sodium bicarbonate is an industrial staple that we use as a cleansing and exfoliating agent. In our household, we utilize it as odour neutralizer and as an alternative fire extinguisher. Sodium Bicarbonate is also useful for cooking, baking and leaving agent.

Question. Which of the following element is not present in the sodium bicarbonate?

Answer. The correct answer is option D. As all the other elements (sodium, carbon, and oxygen) are part of the sodium bicarbonate but potassium does not have any connection with the formula or chemical composition of sodium bicarbonate formula.