Are you aware of the fact that Britishers should be thankful to us for their Industrial revolution? Notably, this industrial sector revolution was given birth by de-centralizing the long-standing cloth production industry of pre-colonial India. Indians were forced to import British goods, which eventually gave support to their industries.

The Pre-Colonial Industrial Sector in India

Before the rise of the British empire in India, it was known for its handicraft industry. Evidently, this industry enjoyed worldwide demand and was held in a high regard. Indian craftsmanship was applauded in all parts of the world. The textile industry was among the most important urban handicraft industry. Articles made up of wool, cotton and silk were famous both inside and outside the country’s boundaries.

Additionally, various metal industries, stone carving, marble work, shipbuilding and tanning and leather industries were taking shape. These industries potentially accelerated India’s growth, establishing it on the world map. However, the British Raj took every step to ensure that this wasn’t the case.

On setting foot in India, the Britishers were looking to cripple out the blooming industrial phase. With this in mind, they eyed the aforesaid industries. In effect, they chalked out a plan to decentralize these flourishing industries. This de-centralization served two purposes.

Firstly, Indian export volume was made dominant with raw materials directed to Britain. Effectively, from a prominent exporter of manufactured handicraft items, India was reduced to a mere exporter of raw materials. Secondly, this ensured that there was a low level of local supply to meet Indian demands for finished goods. Hence, India was forced to turn towards British to meet its demands. 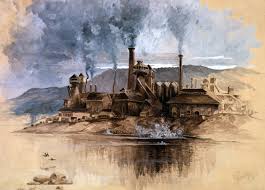 Furthermore, the downfall of aforesaid industries gave rise to large-scale unemployment. Interestingly, colonials shrewdly erased this unemployment, identically born as a result of their policies, by offering employment for working in tea, coffee, indigo plantations and jute industries, completely owned by the colonials. At the same time, increased local demand was being profitably met by the British imports.

Further, some other industries started coming up after the second world war for example- sugar, paper, cement, steel, and iron industry. Notably, 1907 saw the incorporation of the Tata Iron and Steel Company (TISCO).

Also, there was a dearth of capital goods industries. These industries are responsible for producing machines which in turn produce consumption goods. In essence, these are essential from the manufacturing point of view. Although there was an establishment of some units, the slow development could never fill the void of the textile industry.

This coupled with minimal operation of the public sector ( railways, power generation, communications, ports and some other departmental undertakings) defined the sorry state of Indian industrial sector under the British.

The Colonials continued pacifying their interests by setting up industries like jute, tea, coffee plantations etc. taking advantage of a rich geographical diversity of their colony. Conclusively, the British exploitation spread rapidly to all sectors of India and the industrial sector was among the ones worst affected.

Q: Which of the following formed the backbone of Indian industrial sector before colonization:

Ans: The correct answer is ‘C’. Pre-colonial India was known for excellent craftsmanship and saw high demands for outputs from the urban handicraft industry.