Did you know that the deaths due to starvation alone during British rule are estimated to be between 15 to 29 million? Such numbers indicate the adversities of colonial India. The pre-colonial India was primarily producing two crops– rice and wheat. Despite this, it was self-sufficient and sustainable. The incidence of colonization forced changes in the agricultural sector such as commercialization.

The Pre-Colonial Scenario of Agricultural Sector

During the pre-British era, a major part of India’s population was dependent on agriculture. The farming technologies and irrigation facilities were not satisfactory. However, agriculture in villages was self-sustaining and independent.

The village communities either purchased or consumed the raw materials and articles directly. Consequently, starvations and famines were rare if not frequent. Of course, agricultural practices remained primitive, but the villages functioned independently and were self-sufficient. All of this went for a toss when the Britishers set feet on the Indian subcontinent.

Britishers were keen on establishing a monopoly in India. They saw India as a means to drive their home country towards a state of unmatched power. Colonisers drew out every ounce of Indian resource and every drop of Indian blood for their selfish motives. Such was the state of exploitation.

During the British rule also the Indian economy remained agrarian. Rough estimates claim that about 85% of the economy derived their livelihood directly or indirectly from agriculture. Though, unlike the pre-colonial India, the feature of self-sufficiency vanished in the colonial state. This led to various famines which the colonizers paid no heed to provided it didn’t affect their profit margins. Effectively, the agricultural sector continued to experience deterioration and stagnation, particularly marked by low levels of agricultural productivity. 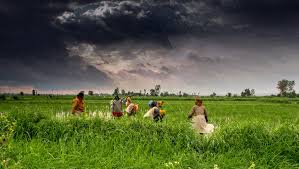 The major cause of this sorry state of Indian agriculture was the various land settlement systems of the colonial government.  The highlight of this was the zamindari system which was practiced in the then Bengal presidency. Under this, the majority of profits went to the zamindars instead of the cultivators, ultimately filling up the pockets of their colonial bosses.

Just like their colonial masters, the zamindars did nothing to improve the state of agriculture. They were only concerned with collecting rent despite the economic condition and the plight of the cultivators. However, the revenue settlement policy particularly fuelled this ruthless nature adopted by the zamindars. Under this, the rent can be paid until a fixed date, failing which their colonial masters would take away all their rights.

Agricultural technologies remained primitive with no efforts to improve conditions from the British side. Even after the introduction of fertilizer technology farmers used natural manure, which resulted in low yields. This coupled with lack of proper irrigation facilities aggravated the misery.

The motive behind agricultural activities shifted from self-sustainability to commercialization focused upon the increase of profits of colonials. As a result, there was an increase in the yield of cash crops, but it helped the farmers in no way. Farmers were now mass producing cash crops instead of food crops, which were ultimately used for the benefit of British industries. These cash crops include cotton, jute, oilseeds, sugarcane, tobacco etc.

Additionally, at the time of partition, a large portion of fertile and highly irrigated land went to Pakistan, especially the jute producing areas that went with East Pakistan (now Bangladesh). Hence, the jute industry received a heavy setback. By and large, the Britishers further added to the plight of Indian agricultural system and left with an enormous task ahead of us.

Q: What was the main interest of the zamindars?

Ans: The correct option is “A”. The only interest the Zamindars had was to collect the rent from the farmers. They did not particularly care about the welfare of the farm or the farmer.