LPG stands for Liberalization, Privatization, and Globalization. India under its New Economic Policy approached International Banks for development of the country. These agencies asked Indian Government to open its restrictions on trade done by the private sector and between India and other countries.

Indian Government agreed to the conditions of lending agencies and announced New Economic Policy (NEP) which consisted wide range of reforms. Broadly we can classify the measures in two groups:

With long-term perspective and eyeing for improvement of the economy and enhancing the international competitiveness, reforms were made to remove rigidity in various segments of Indian economy.

These measures were undertaken to correct the inherent weakness that has developed in Balance of Payments and control the inflation. These measures were short-term in nature. Various Long-Term Structural Reforms were categorized as:

Collectively they are known by their acronym LPG. The balance of Payment is the system of recording the economic transactions of a country with the rest of the world over a period of one year. When the general prices of goods and services are increasing in an economy over a period of time, the same situation is called Inflation. Let’s understand each terminology in detail 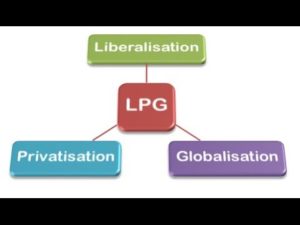 The basic aim of liberalization was to put an end to those restrictions which became hindrances in the development and growth of the nation. The loosening of government control in a country and when private sector companies’ start working without or with fewer restrictions and government allow private players to expand for the growth of the country depicts liberalization in a country.

This is the second of the three policies of LPG. It is the increment of the dominating role of private sector companies and the reduced role of public sector companies. In other words, it is the reduction of ownership of the management of a government-owned enterprise. Government companies can be converted into private companies in two ways:

Crisis of 1991 and Indian Economic Reforms

It means to integrate the economy of one country with the global economy. During Globalization the main focus is on foreign trade & private and institutional foreign investment. It is the last policy of LPG to be implemented.

Globalization as a term has a very complex phenomenon. The main aim is to transform the world towards independence and integration of the world as a whole by setting various strategic policies. Globalization is attempting to create a borderless world, wherein the need of one country can be driven from across the globe and turning into one large economy.

Outsourcing as an Outcome of Globalization

The most important outcome of the globalization process is Outsourcing. During the outsourcing model, a company of a country hires a professional from some other country to get their work done, which was earlier conducted by their internal resource of their own country.

The best part of outsourcing is that the work can be done at a lower rate and from the superior source available anywhere in the world. Services like legal advice, marketing, technical support, etc. As Information Technology has grown in the past few years, the outsourcing of contractual work from one country to another has grown tremendously. As a mode of communication has widened their reach, all economic activities have expanded globally.

Various Business Process Outsourcing companies or call centres, which have their model of a voice-based business process have developed in India. Activities like accounting and book-keeping services, clinical advice, banking services or even education are been outsourced from developed countries to India.

What are the Benefits of Globalization?

The most important advantage of outsourcing is that big multi-national corporate or even small enterprises can avail good services at a cheaper rate as compared to their country’s standards. The skill set in India is considered most dynamic and effective across the world. Indian professionals are best at their work. The low wage rate and specialized personnel with high skills have made India the most favourable destination for global outsourcing in the later stage of reformation.

Question: How are public sector undertaking classified with respect to their performance and professionalism?

Answer: To attain professionalism and improve efficiency with positive competition the government of India identifies its public sector undertakings (PSUs) as:

Share with friends
Previous
Shifts in Demand and Supply
Next
Liberalization

Difference between globalization and privatisation?

globalisation is the rapid influx of goods and services between economies, that means that products and services are exported or imported between countries thus facilitating foreign trade through exports and imports. globalisation thus, ensures competition in the market by producers of different countries. Privatisation on the other hand is the inclusion of the private sector into previously public sector owned enterprises, it involves reducing the governments interference in market operations thus, promoting a healthy business environment by the introduction of several private players into the market.