Childhood is from the poet Marcus Natten. In the Childhood summary, the poet discusses the loss of his childhood. The poet talks about that very moment where this innocence was lost. He talks about the various instances when he could have lost his childhood. Furthermore, a realization comes to the poet that the world is not what it seems. He recalls when a change in his thoughts took place. The poet believes that the people around him are hypocrites. It seems that the poet will never be able to trust people around him ever again. This is because he is aware of their hypocrisy. The poet believes that adults preach love but their actions don’t reflect that. The author tells us that his childhood went to some forgotten place. Moreover, the poet explains that his childhood is hidden in the face of an infant who is innocent. 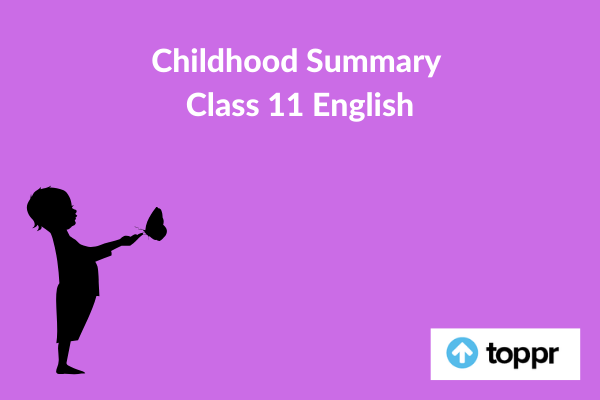 First of all, the poet thinks and wonders about the end of his childhood. He thinks where his childhood came to an end. He wonders that was it the day on which he was no longer eleven years of age. Another option could be the time when the author came to the realization that Hell and Heaven didn’t exist and one could not find them in geography.  So, this was the time when the author could make a distinction between reality and fantasy. The poet comes to the realization that they are imaginary places that have no existence in this world.

Once again the poet again repeats the same question about losing his childhood. Now, the poet wonders that was it the time when he began to view the world with a different perception. Naturally, when humans grow older, their perception of the world changes. However, the poet seems to be deeply affected by it. Furthermore, the poet came to the realization that adults are hypocrites. This is because the adults are not what they appear or seem to be. According to the author, adults preach about love but their behaviour is not so loving. So the author believes that a double-face nature is displayed by the adults. So, was this the time when his childhood go?

Moving on, the poet deliberates on the same question regarding the loss of his childhood. Furthermore, the author asks himself about various possibilities. Moreover, the poet thinks about the day when he came to the realization that his mind was his own. This was the time when the poet came to the realization that he can use his mind in any way he wants. Also, the poet realizes that his thoughts were his own and no one can affect them. One can say that the poet became aware that he can produce his own thoughts and that he had free will. This was the time when the poet became aware of his own individuality and personality. So, was that the day where his childhood became lost?

In the last stanza, the poet becomes remorseful about his lost childhood. It seems the poet has a desire to live his childhood once more. He concludes that his childhood had vanished into a forgotten place from which it can never return. The poet cherishes his now lost innocence. This is the type of innocence that one can only see in a baby’s face. He only has sweet childhood memories which would fade away rather quickly. According to the poet, the innocence of childhood remains only until one is an infant.

The childhood summary discusses how the innocence of childhood gets lost as when grows older and becomes aware of the realities of life.