Summary of Father to Son

The poem ‘Father to Son’ is by the author Elizabeth Jennings. The Father to Son summary deals with the anguish of a father who lacks a good relationship with his son. Furthermore, his son is now an adult. Moreover, his son is now busy in life. Also, the father is bitter regarding the generation gap between him and his son. He is troubled by a feeling of separation with his son. The father expresses his feeling by saying that he does not know much about his son. There also is no sign of understanding. The father has a desire that he wants his relationship with his son to be just like when his son was a child. He tries to mend the relationship but the efforts are in vain. He tries his best to resolve this issue with his son but with no success.  So, they are drifting apart. 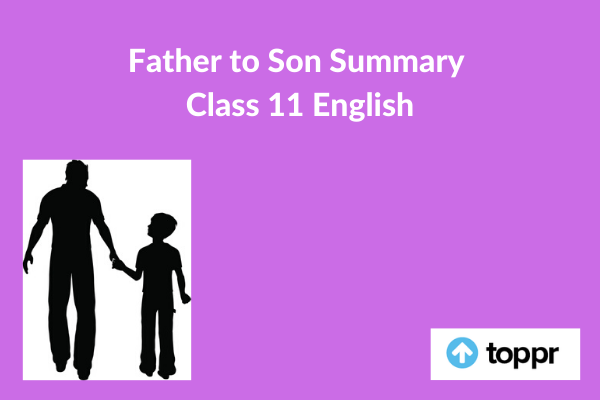 Father to Son Summary in English

The poet shares his feelings regarding the relationship with his son. The poet explains they he and his son have spent many years in the same house. However, in spite of spending so many years together, the father still doesn’t understand his son. Furthermore, the father doesn’t know anything about his son. He doesn’t know what his son likes or what he dislikes. The father made an effort to build up a relationship with his son since he was small. However, over the years, change has come in his son. As a grown-up man, his son certainly has changed.

The father acknowledges his role in the communication gap between him and his son. He explains that despite his efforts, things are not turning to his side.  He says that his son was in a place that he could not access.  Furthermore, the father tells us that their communication is like the communication of strangers. It seems there is not much attachment between the two. Moreover, there has been no signs of understanding between the father and son. His child had a resemblance in appearance with his father. However, in spite of this resemblance in appearance, the father didn’t know what his son loved.

There is a silence between the father and the son. As a child, his son was of a prodigal nature. His father had a desire for his son to return home, the one he knew. The father does not want his son to move around in the world and make his own world. The father was willing to express his forgiveness to his son. Furthermore, the father was willing to let go of the sorrows that he had inside of him due to the existing distance between them. The father certainly had a desire to love him again.

Now, the son speaks for the first time and expresses his feelings. Furthermore, the son has a feeling of sadness about the distance between them. Furthermore, the son tells that he is at a point in his life where he does not understand himself. Moreover, the son explains that his anger is due to sadness. Hence, it becomes pretty clear that both the father and son feel the same frustration due to this gap in the relationship. Also, both the father and son are willing to forgive each other. However, they are failing to find a solution to their problem. Both of them put out an empty hand for each other but in futility.

Conclusion of Father to Son

The Father to Son summary throws light on a damaged relationship between a father and son.