Summary of the Voice of the Rain

The Voice of the Rain Summary – Poet narrates a conversation he had with the falling drops of rain. In the poem, he asks the rain, “And who art thou?” on which the rain replies by calling itself “the poem of the Earth.” Moreover, the rain defines how it rises unnoticeably (as vapour) out of the land and sea and floats up to heaven, where it converts into clouds. After that, it falls back to Earth to refresh the drought-filled land. This allows the seeds to grow into something necessary and beautiful. Further, the poet equates the role of the poet in making this “song” (poet refers to the poem as a song). He also writes that this “song” is born from the poet’s heart.  Besides, it leaves the poet’s soul and then changes form. But it’s same at its core and eventually returns to the reader as love from readers. 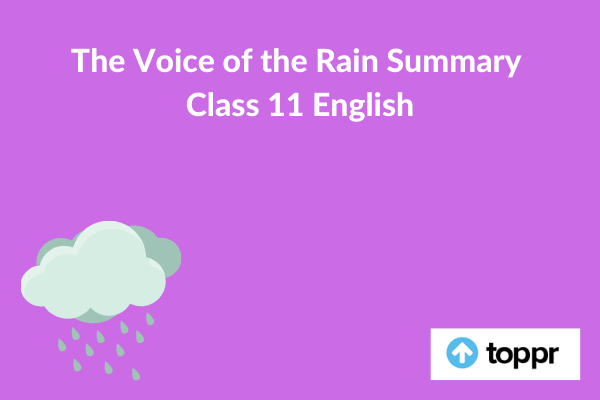 The Voice of the Rain Summary in English

In this poem the Poet Walt Whitman writes of a conversation he once had with rain. It happened when the raindrops gently from the heavens. The poet asks the rain “Who are you?” and strangely the rain replies “I am the poem of the earth.” Moreover, the rain said that it was born in the form of invisible and intangible vapours. This vapour rises eternally from the deepwater bodies and earth’s land. After that, it reaches heaven (the sky) and changes its look to form clouds that can change shapes. Still, it remains the same at its core.

Then again it returns to earth as little droplets that wash away with dust and restore the drought-ridden, dry land. Due to its action, new plants find a life which otherwise remained hidden and unborn inside the land as mere seeds. Hence this perpetual cyclic lifestyle ensures that the rain returns to its origin. It gives life to earth making it pure and beautiful.

After hearing the rain’s story the poet realises that it life resembles that of any song. And the song’s birthplace is the poet’s heart. When the song is complete it wanders (pass on) from one place to another. As it travels it may change or remain the same, But one day, it returns to the poet with all due love of the listeners.

However, the poem is written from the point of view of someone who asks the rain who it was? And the rains answer him “I am the song of the Earth.” And then it continues to till how it comes from the earth, only to return once again to wash it and nourish it…that if it were not for the rain, the seeds would remain seeds and we won’t get any flowers from them.

Also, if the rain hasn’t return then the seeds would remain seeds and not flower into the full potential and giving back life to its origin. Afterwards, the poem turns into a story which tells a song. The song tells the story of rain its birth-place, wandering, Reck’d or unchecked duly with love returns. It means that songs come from the soul after they’ve been heard, and thought good or bad, return with love.

When the rain rises and falls the poem also do the same. Like songs and other forms of beauty from the soul. Besides, the rain is like a song that originates from its birth-place i.e. the heart of the poet. Moreover, it travels everywhere around the globe and returns back to the poet in the form of praise. However, whether it is ruined or not, and it returns back with a lot of love for its birth-place.

Conclusion of the Voice of the Rain Summary

Through the voice of the rain summary, the writer wants to portray the life of rain and how it is like a song.