In view of the coronavirus pandemic, we are making LIVE CLASSES and VIDEO CLASSES completely FREE to prevent interruption in studies
English > Footprints without Feet > A Question of Trust Summary Class 10 English

Summary of A Question of Trust

This article is about A Question of Trust Summary from Class 10 English. The author of this short story is Horace Danby. This story is about a thief who gets a taste of his own deeds. Horace Danby is a thief completely. He steals only once in a year. He is fond of books and spends most of his money on buying books. Also, he plans accurately before attempting any burglary. During his burglary attempt at a big house, he studied well before entering the house for stealing from the safe. A lady thief cheated on him who claims herself to be the owner of the house. Finally, Horace ends up in prison only to regret the way that a man should not trust anyone, particularly from his own profession. 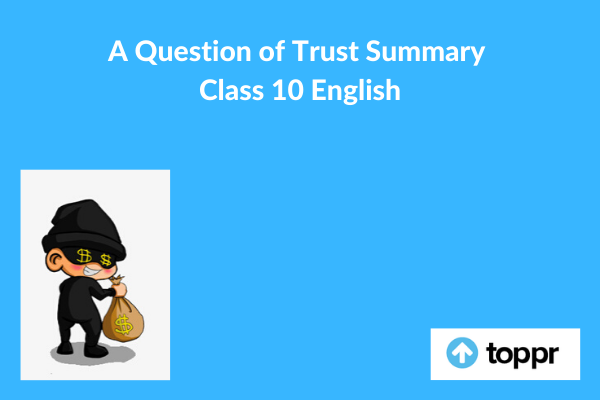 A Question of Trust Summary in English

Horace Danby was a good person. He was fifty years old but still unmarried. Horace Danby was a locksmith. He was a very successful businessman. He had two assistants to help him. Being good and respectable, but he was not totally honest. He was fond of rare and expensive books. He purchased them at any cost. For this, he robbed safe only once in a year. He purchased these books secretly through an agent. Before making a theft, he chalked out plan well. This time he had observed the house at Shotover Grange for two weeks. He studied even the minute things about that house.

The family was now in London. The two caretaker servants of the house had gone to the movies. He jumped out from behind the garden wall and came inside the house. He had taken a key from the kitchen door hook. Then, he wore gloves. He opened the door. He was very careful enough to leave any fingerprints. There was a vase of flowers on the table. The fragrance of flowers tickled his nose. He sneezed out repeatedly then, he heard the voice of a young lady. She pretends to be the wife of the owner of that house. She told him that she had come there suddenly because she wanted her jewels to wear them at the party in the night.

Danby requested the lady to let him go home. She asked him to open the safe as she needed the jewels but she had forgotten the number. Danby willingly opened the safe without gloves. The young lady got the jewels. Horace Danby went away happily because he had escaped from being imprisoned. On the third day, a policeman had arrested him for the jewel robbery at Shotover Grange.

His fingerprints were found at the robbed place. He confessed that he had opened the safe for the young wife of the owner of the house. But in reality, the owner’s wife was about sixty years old. She said that the story was not true. No one believed Danby. Now, the police arrested him. He was the assistant librarian in the prison. He always thought of the charming, young lady who was in the same profession as he was. Now he didn’t believe in the thought of ‘honour among thieves.’

Conclusion of A Question of trust

The message of this story is that we should not trust anyone without discovering out about that person.