In view of the coronavirus pandemic, we are making LIVE CLASSES and VIDEO CLASSES completely FREE to prevent interruption in studies
English > Footprints without Feet > The Book that Saved the Earth Summary Class 10 English

Summary of The Book that saved the Earth

This article focuses on The book that saved the earth summary. The author of the play is Claire Bioko. The play is all about the imaginary world. The characters of the play are Think Tank, Noodle, Oop, Omega, etc. They are the Martian living being, and the time set of the play is the twentieth century. All the characters reached to a library on earth and misinterpret the books with sandwiches. Later they try to understand the rhymes in the book. They felt that they are in danger and immediately left the earth. Hence, a mere children’s rhymes book saved the earth from the Martian invasion. The play illustrates in detail how the book saved the earth from the Martians invasion. 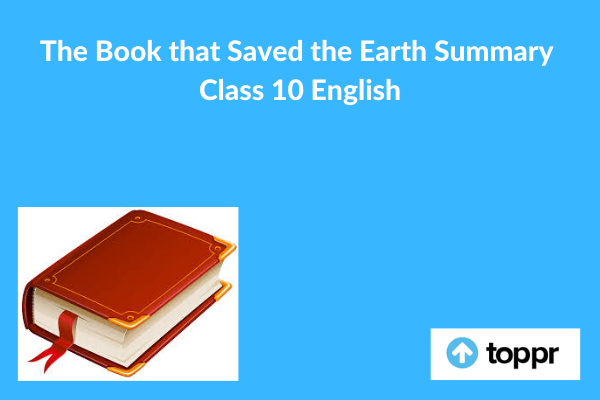 The Book that saved the Earth Summary in English

The plot of the play is in the twentieth century. All the characters of the play are imaginary characters and have weird names like the mighty Chief Think Tank, Noodle, Captain Omega, Lieutenant Iota, Sargent Oop, etc. The think tanks who think himself to be the most intelligent amongst all the Martians to decide to go to earth with his team. He always thinks that because he had a big head he is the most intelligent and always likes to be praised for that. They want to know how people of the earth (they call them earthlings) lives. In the next scene, they all were present in a library full of books. But all of them were unable to understand the place.

Then the mighty Think-Tank tries to show is acumen and tells his crew that the thing is a sandwich. As the person of the earth eats a lot of so they must have stored them here. Then one of the crew members Sergeant Oop even eats the corner of a book to confirm the views of Think-Tank. But he did not like the taste, and they came to the conclusion that this may be something else than food. After some time Noodle suggests Think-Tank that maybe it is used for communication with ears. After some time Noodle again suggests Think-Tank that maybe it is for eye communication. All the crew members started opening and reading the book. It was a rhymes book of name, Mother Goose. But they are unable to understand the book.

So looking at this Noodle asks the Think-Tank that the chemical department has given them the vitamin pills to increase intelligence, and they all should take it and then read the sandwiches. As Oop started reading the book of nursery rhymes they take the literal meaning of rhymes and feel troubles. The Think Tank called his Martians team and says that they have gathered some information about earthlings, and they should be postponing the idea of invasion. The Oop read the rhyme Humpty dumpty, and they all saw the picture of Humpty who looked like Think Tank. The Think Tank drew an inference that the earthlings have identified him and will kill him soon. So, he asked his team to run immediately from there and thus a dusted book of rhymes saved us from Martian invasion.

Conclusion of The Book that saved the Earth

The moral of the play is that half-fed knowledge is always dangerous.

Share with friends
Previous
What is a Function in Maths?
Next
Bholi Summary Class 10 English