In view of the coronavirus pandemic, we are making LIVE CLASSES and VIDEO CLASSES completely FREE to prevent interruption in studies
English > Footprints without Feet > The Midnight Visitor Summary Class 10 English

Summary of the Midnight Visitor

The Midnight visitor is a detective story and its writer is Robert Arthur. This article is about the midnight visitor summary. Ausable is a detective. He is one such secret agent, who expects to get some sensitive papers in his hotel room. But one of his rival Max attacked him at the gunpoint, and he demands the papers. But, Ausable showed a remarkable common sense and he came out of this situation. Fowler, his friend was surprised to see a secret agent Ausable, who was too fat to be a secret agent based on his physical appearance.

For Fowler the situation was scary. But, Ausable, sensing the danger, fabricated a brilliant story about the non-existent balcony on which Max believed. Ausable again befooled Max by saying that the police were knocking at the door. Max wanted to run away to avoid the police and jumps to his death into that virtual balcony. 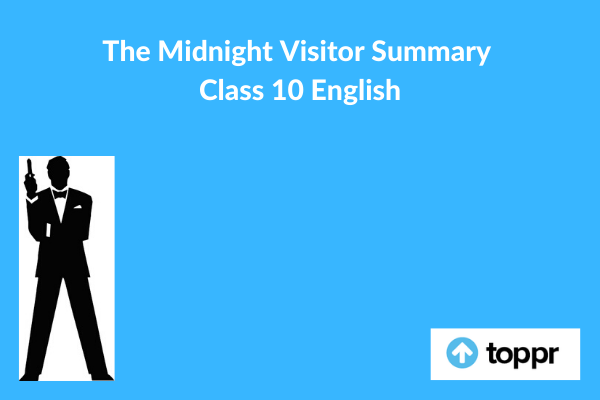 The Midnight Visitor Summary in English

This story is about the witty secret agent Ausable. He was with a writer friend Fowler. They planned to spend time in the evening. Then Fowler realized that he is exactly the opposite of what he had imagined about him. Ausable told Fowler that he had been thinking wrong and very soon he would be looking at a very important report which would change the country’s future. Then both went to his room. But, when they enter the room another guy Max with a gun was standing in the room. He asked them to be comfortable until the reports related to missiles arrived.

This was really an adventurous experience for the Fowler while meeting with a secret agent. Meanwhile, Ausable started with a story about a hypothetical balcony below the window of his room. While this talk was going on, someone was continuously knocking at the door. Ausable said that the police were at the door came to check him and his room on a regular basis. Max, pointing his gun towards both of them, said that he would be waiting in the balcony and during this time Ausable should send away the police otherwise he would shoot them.

As the doorknob is turned in loud, Max jumps out of the window and they heard a loud scream. The door opens and a waiter comes in. The waiter says that he has brought the wine that Ausable had ordered. He keeps the bottle, tray and glasses there on the table and leaves. Fowler is surprised after seeing all that. Fowler asked him about the police. Then Ausable replied that there was no police. Fowler again asked about Max, who was waiting in the balcony outside the window. Then Ausable replied that the person would not return as there was no balcony at all.

This shows the quick wit of Ausable as he took advantage of the situation and successfully made Max nervous. Under his nervousness, he jumped out of the window without any thought. He jumped from the top floor of the hotel and hence died. Thus, Ausable outwitted Max and saved himself from a very dangerous situation.

Conclusion of The Midnight Visitor

The ultimate message that one can get from this story is that in any situation we should not panic instead we should take a step and face the situation with our presence of mind.