In view of the coronavirus pandemic, we are making LIVE CLASSES and VIDEO CLASSES completely FREE to prevent interruption in studies
English > Footprints without Feet > The Necklace Summary Class 10 English

Summary of The Necklace

In this article, you will be reading the necklace summary. It is a fictional short story in the genre of realism. The author of this story was Guy de Maupassant. The story ended with a twist, also known as an ironic ending. This type of ending was a hallmark of Maupassant’s style. The story took place in France several hundred years ago. The story tells that one must be satisfied and content with what one has. Also, one must not hide the truth. In this story, Mathilde Loisel faces a very hard time as a result of her desires. 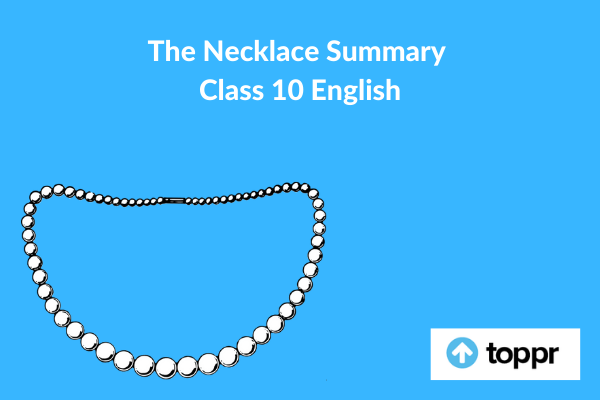 The Necklace Summary in English

A lady, Mathilde Loisel lived in a flat with his husband. He worked as a clerk for the Ministry of Education. They were not able to live a luxurious life. However, they were not poor, merely simple. However, Mathilde’s desire was to be rich. She felt irritated, disappointed and sad of not having a large house. Moreover, she desired to have good dresses, lots of jewelry which made her sad.

One day his husband brings her an invitation to a fancy party. It was an invitation to the ball. He thought his wife would be very excited about seeing the invitation letter. However, his wife, instead of being happy, threw away the invitation letter and started crying. She complained about not having a pretty dress to wear on such a great occasion. She wanted to seek admiration for everyone. Also, she wanted to be a success at the party. His gentle husband gave her four hundred francs to buy a pretty dress. He had saved the money to buy a rifle.

The week of the party approached. His wife seemed to be anxious again. She was upset as she felt that she didn’t have any jewelry to wear with the dress. Her husband suggests her to ask the same from his friend Jeanne Forestier. Mathilde went to her house and borrowed a sparkling necklace.

Mathilde, along with his husband enjoyed a lot at the party. She was successful in seeking everyone’s attention to her. Then, they headed for home during the odd hours in the morning. On reaching home, Mathilde was surprised on not finding a necklace around her neck. They both felt that it might have fallen down in the cab which they took to reach home. Also, he searched on the streets they have come through.

Moreover, he approached the police, gave advertisement but all in vain. Her husband asked her to write a letter to her friend. She wrote that she had the clasp broken and is getting it repaired. Meanwhile, they were successful in searching for a similar necklace. However, it cost thirty-six thousand francs. His husband has inherited eighteen thousand francs from his father. However, they had to borrow the remaining money. They managed to buy the necklace through inherited and borrowed money.

But it took them a period of ten years to repay the borrowed amount. In these years, their lives have drastically changed. They moved to a smaller apartment, cleaned and cooked herself. Moreover, his husband did multiple jobs to repay the amount. Also, she looked like a strong woman of a poor household. She looked very aged. One day she saw Miss Jeanne Forestier on the street. She decided to tell her the truth about the necklace. The latter was stunned by the rough appearance of the former. Moreover, on learning the truth of necklace, Jeanne Forestier told that it was a fake one. The worth of the same was no more than five hundred francs.

Conclusion of The Necklace

The story tells us that one should not crave for luxuries. One must be satisfied and contented with what one has. Desires lead to unhappiness. Moreover, we should never hide the truth.