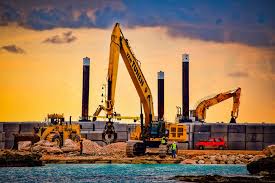 This happened due to the well-structured societies, stable governments, heavy foreign investments, strategic locations, and many more reasons. Also, when you see the industrial development of India, you will find many similarities with China.

Thus, fields like nuclear technology, bioengineering, informatics, etc saw a huge boost. This exceeded their needs and created several specialization poles. The ideology was to grow politically and economically. And this was only possible only if the industries are highly modernized.

So, for these industries, the new units were established exclusively by the government. This was done within disturbing the current setup done by the private players.

The list of the industries included 18 industries. It included iron and steel, ferroalloys, heavy castings among the other industries.

For this modernization, the government committed itself towards developing the basic steel industry. Also, in the spirit of this, the government started a chain all over the country for steel plants. The first one was established in Rourkela in Orissa. This was followed by Bhilai and Durgapur.

The main reason for the modernization of the industries is diversification and industrial growth. This was put into place with the commencement of the second five-year plan.

Also, the strategy involved a shift towards industries that produces basic materials played a bigger role. During independence, the industrial structure was still restricted to textiles and sugar.

However, after that, the first steel plant was set up. Also, the minor works began with the development of engineering for assembly plants and railway workshops.

Also, with the development of the public sector, the industrial organization has gone a major change. It was noticeable particularly in mining as wells organized manufacturing. This sector from 1960 to 1977 grew from 8.1% to 28.8%.

Thus, it can be said that the development of the public sector has been a key change for industrial diversification. Also, the industrial policy of the government was such that there were important roles for the private sector.

Also, it was witnessed that there was development in banking institutions. These aspects are well emphasized in the 10th annual plan.

Q. The first industrial policy of the government in 1948 gave a leading role to the private sector.

Q. Which of the companies needs to have compulsory licensing?