The shortest distance from a point to a plane is actually the length of the perpendicular dropped from the point to touch the plane. This lesson conceptually breaks down the above meaning and helps you learn how to calculate the distance in Vector form as well as Cartesian form, aided with a solved example at the end.

Table of content
1 Suggested Videos
2 Shortest Distance from a Point to a Plane
2.1 Browse more Topics Under Three Dimensional Geometry
3 Equation in Vector Form
4 Equation in Cartesian Form
5 Solved Example for You

Shortest Distance from a Point to a Plane

The focus of this lesson is to calculate the shortest distance between a point and a plane. This distance is actually the length of the perpendicular from the point to the plane. We can clearly understand that the point of intersection between the point and the line that passes through this point which is also normal to a plane is closest to our original point.

Thus, the line joining these two points i.e. the perpendicular should give us the said shortest distance. So, if we take the normal vector \vec{n} and consider a line parallel to it which meets our original point, then this parallel line is actually the required shortest distance. 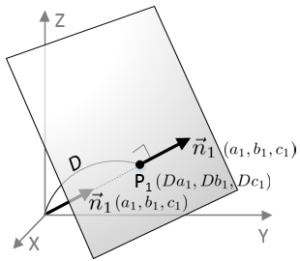 In the following section, we shall look at how the shortest distance can be calculated in both, Vector form and Cartesian form.

If we consider another plane to be parallel to our first plane and let this new plane pass through the point A, then the equation of the second plane, where \(\vec{N’}\) is normal to the plane  can be written as

You can clearly understand that if the distance were to be calculated from the origin, we only need to substitute the position vector \(\vec{a}\) by 0 and the formula for the shortest distance, in that case, will become –

Now, the equation of the normal to the plane is –

Now, we shall simply use the formula in vector form to arrive at the Cartesian formula –

To understand further, how the calculations are actually performed, follow the simple example given below:

Question: Find the distance of the plane whose equation is given by

So, using the formula for the shortest distance in Cartesian form, we have –

Ques. Can a plane be curved?

Ans. A plane curve is a curve inside a plane that might be a Euclidean plane, an affine plane or it can be a projective plane. These plane curves also comprise the Jordan curves, that enclose an area of the plane but need not be smooth, and the graphs of continuous functions.

Ques. What is a plane in science?

Ans. In the vast study of Science a surface produced by a straight line constantly moving at velocity with respect to a point that is fixed. An area of a 2D surface containing determinate extension and spatial direction or position.

Ques. Why do three points define a plane?

Ans. Because 3 non-collinear points are required for determining a unique plane in the Euclidean geometry. Given 2 points, there is correctly a line that can comprise them, but infinitely numerous planes can comprise that line. As long as 3 points don’t lie all on the same line, they determine a unique plane.