Rearranging the equation, we have

Now let us proceed to the Cartesian equation of the line in space. 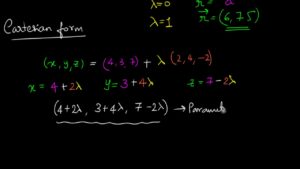 The Cartesian equation of a line in space can be explained in a similar manner. Let the coordinates of a point A through which the line passes are \( (x_1, y_1, z_1) \) and the direction ratios of the line be a, b, c. So  we write the equation as

Now, substituting in the vector form of the equation of a line –

This is the equation of a straight line in space in Cartesian form. The following section contains a solved question for you to understand how problems on this topic can be tackled step by step.

Solved Example for You on Straight Line

Answer: We can find the equation of the line in Cartesian form by using the formula above as –

Thus we can write the equation as –

Question 2: Explain what is a straight line in math.

Answer: We can define a straight line as the set of all points between and extending beyond two points. In addition, two properties of straight lines in Euclidean geometry are that they have only one dimension, length, and they extend in two directions forever.

Question 3: How to calculate a straight line?

Question 4: How to find the slope of a straight line?

Question 5: What is a vertical line?

Answer: It refers to a line on the coordinate plane where all points on the line have the same x-coordinate.